Fran Belkin will sign copies her new book “Rock This Town! Backstage in Cleveland: Stories you never heard & swag you never saw!” in OH this month.

In the mid ’60s, her husband Jules was a pioneer in the rock and roll music industry. Fran worked along side him as Belkin Productions grew to become one of the largest regional concert promoters in the nation. At the same time, Fran nurtured her passion for art and creative projects. Her 10’ mosaic Fender guitar appeared on the cover of the Rock and Roll Hall of Fame’s first Guitarmania catalog, and she has studied at Anderson Ranch in Colorado. For over a decade, she’s served on the Cleveland Institute of Art’s Board of Directors, Fran produced Tripped Up, a 2018 feature-length documentary film chronicling Competitours, her son’s 11-day travel competition, (in which she’s participated five times). The film premiered at Cleveland International Film Festival and is currently on the festival circuit. Rock This Town! is her first book. 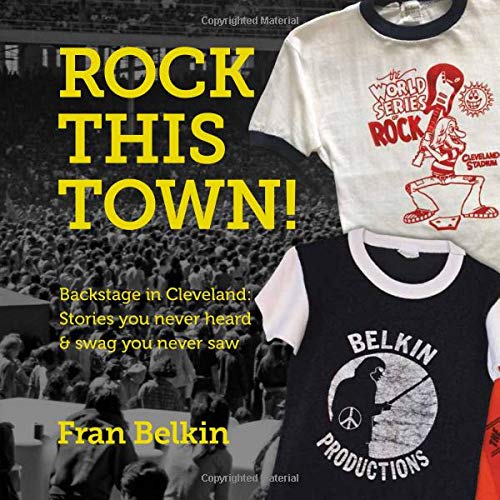 Fran Belkin’s collection of t-shirts wound up in boxes in the attic, until one day she realized these mementos chronicling over thirty years of Cleveland rock and roll history could illustrate the incredible story of a most unusual family business: Belkin Productions.The shirts and swag paint a picture of the times, the music, the bands and the concert promotion company her husband Jules and his brother Mike built into a powerhouse on the national music scene. In Rock This Town!, Fran’s collection is artfully woven together with vintage snapshots, concert photography and intimate stories shared by the Belkin Productions crew who lived them. This book is for those of us who were out front, standing drenched in a World Series of Rock downpour, singing along to every word of our favorite song, Bic lighters in the air, screaming for another encore. This is a love letter to every fan of rock and roll.