Daniel Levy is an Emmy® winning showrunner, writer, actor, director, and producer, best known for his work on Schitt’s Creek, which he co-created with his father Eugene Levy. For its sixth and final season, the series received nine Emmy® wins, becoming the most awarded comedy series in a single year. The show also broke major records for being the first comedy or drama series to sweep all four acting categories and received the most wins for a comedy series in its final season. Levy and his father were also the first father-son pair to win Emmys in the same year and Levy tied the record for most wins by an individual in a single season with four total wins. Levy began his television career co-hosting MTV Canada’s flagship show MTV Live. In 2019, Levy signed a multi-year overall deal with Disney’s ABC Studios to develop and produce scripted projects for the studio. Recently, Levy starred alongside Bette Midler, Kailtyn Dever, Sarah Paulson, and Issa Rae in Coastal Elites on HBO and appeared in the romantic comedy Happiest Season for TriStar Pictures and Entertainment One. Most recently, Levy made his hosting debut on Saturday Night Live in early 2021.

Eugene Levy is an Emmy® winning, actor, producer and writer. He is best known for his work on Schitt’s Creek, which earned him two Emmy® awards for Best Comedy Actor and Best Comedy Series. He also has appeared in more than 60 motion pictures to date, eight of which having topped the $100M mark, including Bringing Down The House, Cheaper By the Dozen 2, and Father Of The Bride Part II. But it was the role of Noah Levenstein in the American Pie franchise that cemented his reputation as America’s favorite Dad. Partnering with Christopher Guest, Levy earned critical acclaim for co-writing and co-starring in Best In Show, Waiting For Guffman, For Your Consideration, and A Mighty Wind. Levy has been nominated for and won countless awards for his films including a New York Film Critics Circle Award and a Grammy Award® for A Mighty Wind and a Golden Globe® nomination for Best In Show. Levy is a Member of the Order of Canada and a recipient of The Governor General’s Performing Arts Award, the foremost Canadian honor for excellence in the performing arts. 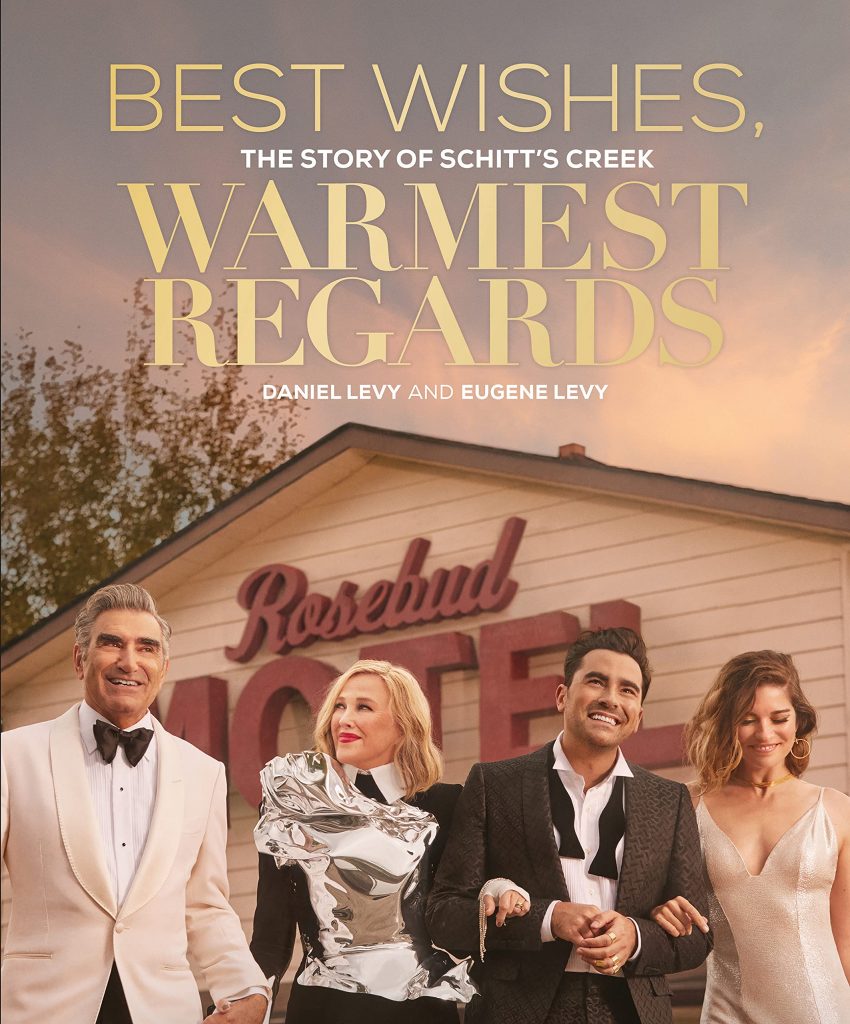 This beautifully produced, keepsake coffee-table book is the ultimate celebration of the series, the town, the characters, and the state of mind that is Schitt’s Creek. Capturing the essence and alchemy of all six seasons of what is now considered to be one of the most groundbreaking comedy television series of the last decade, Best Wishes, Warmest Regards is a gift to fans everywhere who have made the show their own.

Included are character profiles from the cast of Johnny, Moira, David, and Alexis, and all of the characters that populate the town, major moments from Moira’s endorsement of Herb Ertlinger Winery, to Patrick and David’s first kiss, to Cabaret and the Rose Family Christmas episode. Also included are special features, such as the complete, illustrated catalogs of David’s knits and Moira’s wigs, Moira’s vocabulary, Alexis’s adventures, and behind-the-scenes moments from Dan and Eugene Levy and the cast of Schitt’s Creek.