New York Times bestselling author Tanya Anne Crosby is a five-time nominee for a Romantic Times Career Achievement Award. She is best known for stories charged with emotion and humor and filled with flawed characters. Tanya has written for Kensington Publishing, Harlequin, and Avon Books/Harper Collins, where her fifth book Once Upon a Kiss launched the Avon Romantic Treasures line. She lives with her husband, two very spoiled labs and two ex-stray cats in northern Michigan and grew up in Charleston, South Carolina. Her favorite color is green. She once tried to change her name to Anne (in the third grade) and has a dual citizenship (U.S. and Spain), which she fully intends to put to good use now that the kids are grown and have their own cars. 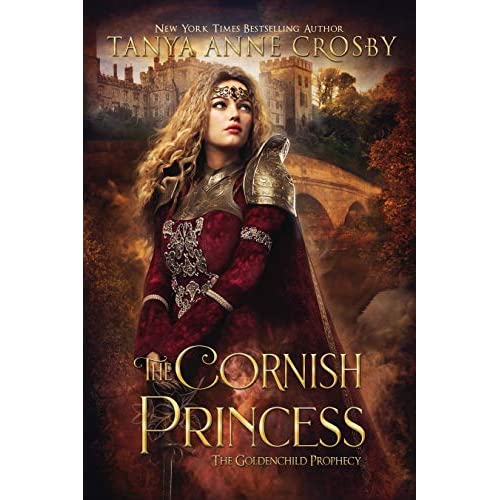 Long before there was a Winter King, there was a Summer Queen—Gwendolyn of Cornwall, a fierce warrior princess who raised an army to unite a nation.

Said to be a changeling child left to the King and Queen of Cornwall, Gwendolyn is “blessed” at her cradle by three Fae gifts: a prophecy for her future, a gift of “Reflection,” and a golden mane—quite literally. Every lock of her hair will turn to gold, only provided it is cut by her one true love.

But no one understands more than Gwendolyn that her blessings are truly curses. Because any man who gazes upon her will see his own heart reflected in her countenance, and depending upon his virtue, she is either the loveliest woman in all the land… or the most hideous. It’s a cruel jest of the capricious Fae, for unless a man’s heart is true, she is destined to be coveted for her crown, and despised for her face.

To make matters worse, Gwendolyn’s aging and ailing father is desperate for an alliance with King Brutus of Loegria. “The Romans are coming,” and according to the Goldenchild Prophecy, only by uniting their dragon banners can they stem the Red Tide. Offered to Brutus’s ambitious son, Prince Locrinus, Gwendolyn’s heart is nevertheless tempted by a mysterious, maddening half-blood Fae whom she can never wed if she is to fulfill her crib side prophecy.

If you love British lore, and you ever longed to dive head-first into its spirit…
If you ever hoped to meet the “tribe of the gods” who ruled Ireland and indelibly left their mark upon the British Isles…
If you’re ready to embark upon a magical journey into the beginnings of Celtic Lore…
If you can find it in yourself to trust me as your storyteller and leave all your expectations behind… join me for a rollercoaster ride through history.