Larry Correia and Sarah A. Hoyt will sign their new book “Monster Hunter Guardian” in CO next month.

Larry Correia is the creator of the Wall Street Journal and New York Times best-selling Monster Hunter series, with first entry Monster Hunter International, as well as urban fantasy hardboiled adventure saga the Grimnoir Chronicles, with first entry Hard Magic, and epic fantasy series The Saga of the Forgotten Warrior, with first entry Son of the Black Sword and latest entry, House of Assassins. He is an avid gun user and advocate and shot on a competitive level for many years. Before becoming a full-time writer, he was a military contract accountant, and a small business accountant and manager. Correia lives in Utah with his wife and family.

Sarah A. Hoyt, under various names, is the author of over 30 books—she gets tangled up when she tries to count them and always misses a couple—in science fiction, fantasy, mystery, romance, and historical fiction.

Her first published novel, Ill Met by Moonlight, was a finalist for the Mythopoeic Award. Darkship Thieves, the first novel of her popular Darkship Thieves series is a Prometheus Award Winner.

She’s published over 100 short stories in magazines such as Analog, Asimov’s, and Weird Tales (and others, some no longer in existence), as well as an array of science fiction, fantasy, and mystery anthologies.

Sarah was born and raised in Portugal and now lives in Colorado, near her two grown sons, with her husband and a varying clowder of cats. English is her third language, but she can swear fluently in seven. When not laying down words on the latest manuscript, she can be found refinishing furniture, walking, or studying history. 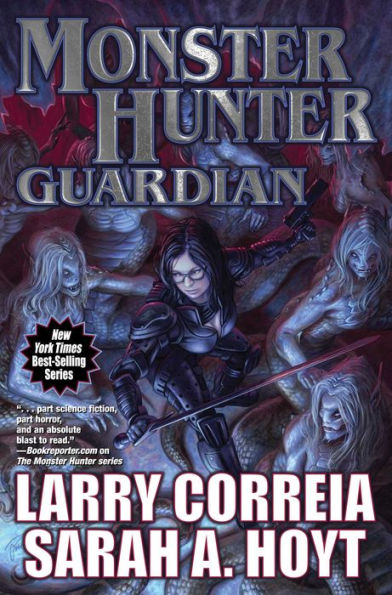 When Owen Pitt and the rest of the Monster Hunter International crew are called away to mount a month’s-long rescue mission in a monster-infested nightmare dimension, Julie Shackleford—Owen’s wife and descendant of MHI founder Bubba Shackleford—is left behind. Her task: hold down the fort and take care of her new baby son Ray. Julie’s devoted to the little guy, but the slow pace of office work and maternity leave are starting to get to her. But when a routine field call brings her face-to-face with an unspeakable evil calling itself Brother Death, she’ll get more excitement than she ever hoped for.

Julie is the Guardian of a powerful ancient artifact known as the Kamaresh Yar, and Brother Death wants it. In the wrong hands, it could destroy reality as we know it. Julie would die before giving it up.

Then Ray goes missing, taken by Brother Death. The price for his safe return: the Kamaresh Yar. If Julie doesn’t hand over the artifact it means death—or worse—for baby Ray. With no other choice left to her, Julie agrees to Brother Death’s demands. But when you’re dealing with an ancient evil, the devil is in the details.

To reclaim her son, Julie Shackleford will have to fight her way through necromantic death cults, child-stealing monsters, and worse. And she’ll have to do it all before Brother Death can unleash the Kamaresh Yar.

It’s one woman against an army of monsters. But Julie Shackleford is no ordinary woman—she’s one tough mother!

About Larry Correia and the Monster Hunter International series:

“[E]verything I like in fantasy: intense action scenes, evil in horrifying array, good struggling against the darkness, and most of all people—gorgeously flawed human beings faced with horrible moral choices that force them to question and change and grow.” —Jim Butcher

“[A] no-holds-barred all-out page turner that is part science fiction, part horror, and an absolute blast to read.” —Bookreporter.com