D.J. Butler will be signing copies of “Witchy Kingdom” in CO next month.

D.J. (“Dave”) Butler grew up in swamps, deserts, and mountains. After messing around for years with the practice of law, he finally got serious and turned to his lifelong passion of storytelling. He now writes adventure stories for readers of all ages, plays guitar, and spends as much time as he can with his family. He is the author of City of the Saints, Rock Band Fights Evil, Space Eldritch, and Crecheling from Wordfire Press, and Witchy Eye from Baen Books. Read more about Dave and his writing at http://davidjohnbutler.com, and follow him on Twitter: @davidjohnbutler. 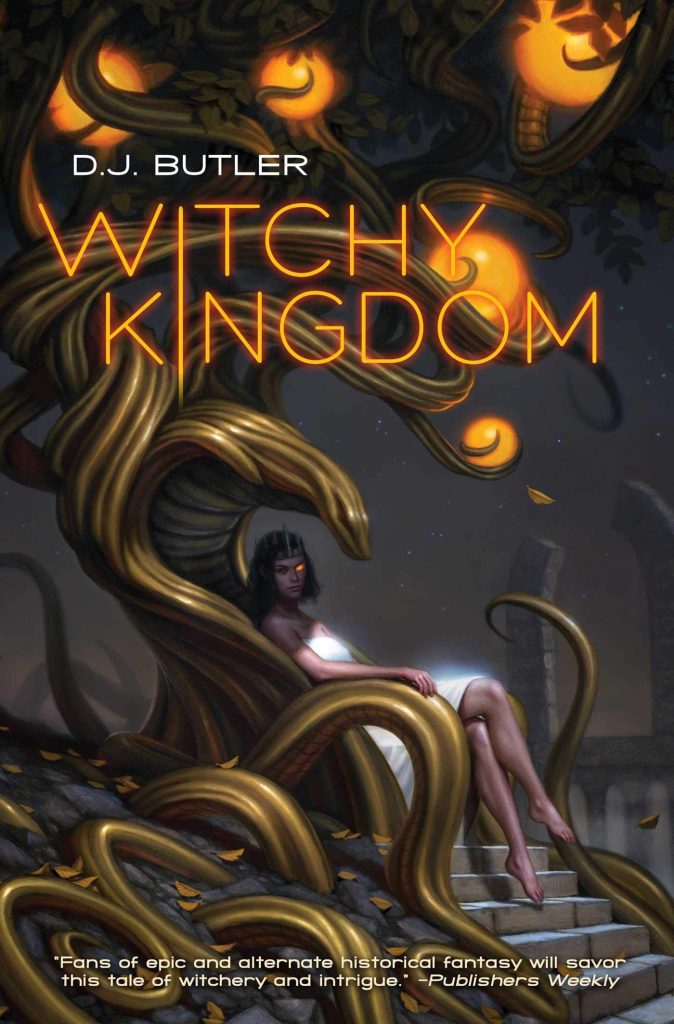 SEASON OF THE WITCH

An encounter with her father’s goddess has not turned out to be the end for Sarah Elytharias Penn. Now, with the Imperial fist tightened around her city of Cahokia and the beastkind of the Heron King ravaging across the river, she must find a way to access the power of the Serpent Throne itself—a feat, she has learned, that her father never accomplished. To complicate her efforts, Cahokia’s Metropolitan, a beloved and charismatic priest who despises the goddess as a demon, returns from a long pilgrimage and attempts to finalize the Wisdom-eradicating reform that dogged Sarah’s father when he was king.

Meanwhile, Sarah’s brother Nathaniel and her brilliant but erratic servant Jacob Hop find their steps dogged by the Emperor’s Machiavel, Temple Franklin, as they hunt in New Amsterdam for the third Elytharias sibling. As Simon Sword’s destroying storm threatens from the south and west, and New Orleans is thrown into deadly turmoil when a vodoun priest and mameluke assassins contend for ultimate power and control of the Mississippi, the chance for a unified New World teeters on the brink. Sarah Penn understands she may face a hard fate in the final reckoning. But she also knows that only she can access the power of the Throne—if she can find the Wisdom inside to unlock it.

Praise for Witchy Winter:
“Butler follows Witchy Eye with a satisfying second tale of a magic-filled early America. . . . Deep and old magic influences both places and characters, and the story is tightly focused on the determined Sarah . . . Fans of epic and alternate historical fantasy will savor this tale of witchery and intrigue.”—Publishers Weekly

“For readers who love history-based fantasy, steampunk, or urban fantasy. . . this series that gives the genre a new twist.”—Booklist

“Excellent book. I am impressed by the creativity and the depth of the world building. Dave Butler is a great storyteller.”—Larry Correia

“Witchy Eye is an intricate and imaginative alternate history with a cast of characters and quirky situations that would make a Dickens novel proud.” —Kevin J. Anderson

“Butler’s fantasy is by turns sardonic and lighthearted; ghoulish shadows claw into the most remote areas and heroism bursts out of the most unlikely people. Sarah is the epitome of the downtrodden hero who refuses to give up until she gets what she needs, and her story will appeal to fantasy readers of all stripes.”—Publishers Weekly

“David’s a pro storyteller, and you’re in for a great ride.”—Larry Dixon

“… a fascinating, grittily-flavored world of living legends. Hurry up and write the next one, Dave.”—Cat Rambo

“This is enchanting! I’d love to see more.”—Mercedes Lackey

“Witchy Eye is  a brilliant blend of historical acumen and imagination, a tour-de-force that is at once full of surprises and ultimately heart-warming. This is your chance to discover one of the finest new stars writing today!”–David Farland

“[A] unique alternative-history that is heavily influence by urban and traditional fantasy and steeped in the folklore of the Appalachians. . . . Fans of urban fantasy looking to take a chance on something with a twist on a historical setting may find this novel worth their time.”—Booklist