Marc Bloom & Coach Bill Aris will be signing copies of “Amazing Racers” in NY next month.

Marc Bloomis an award-winning track and field journalist. He was a senior writer forRunner’s Worldmagazine and is the author of ten books, including Run with the Championsand God on the Starting Line. He lives in Princeton, New Jersey. 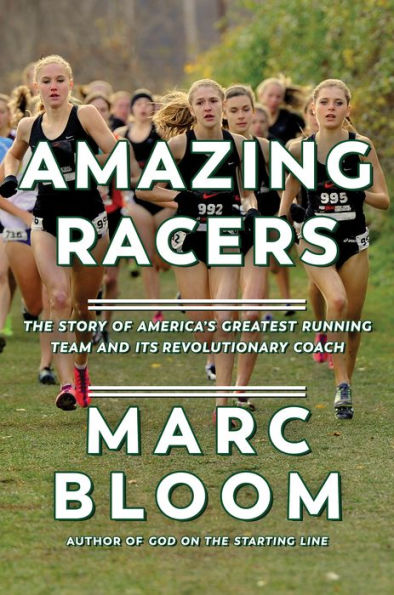 The inspiring, untold story about a group of remarkable athletes and their groundbreaking coach who live and train in startling ways—and are redefining running excellence in the United States.

What would one call taking teens with no evident running talent and challenging them with boundless hill training combined with mantras from rock ‘n’ roll, techniques from Kenya, philosophy from Australia, and turning them into champions? Is it revolutionary? Or a risky rebellion against running—and teenage—norms?

Coach Bill Aris has heard both, but one thing is indisputable. Everything Aris does with his runners—male and female alike—is new and extraordinary, and he has created a new American running dynasty. The cross-country runners of Fayetteville-Manlius, or F-M, in upstate New York have dominated high school running for 15 years, sweeping boys’ and girls’ titles at the Nike Cross Nationals championships (NXN) in 2014 in an unprecedented achievement.

The girls’ team, empowered by Aris’ unique, unwavering brand of gender equity, has won 11 of the last 13 NXN titles, some by margins of over 100 points. The boys’ team has the best cumulative national record of NXN podium performances. F-M domination has shocked the sport for its defiance of accepted running principles and limitations. One year at NXN, the F-M girls defeated the all-star field of top teams by an average of 59 seconds per girl in the 5k race.

Another year, the girls ran faster than their teenage Kenyan counterparts, who competed in the Portland, Oregon event as an international showcase. Across the country, coaches awed by F-M and unaware of the team’s methods and discoveries, whispered, “How do they do it?”

From adopting long-forgotten “Stotan” creeds—combining the rigors of a Spartan and stoic lifestyle—to delving into teenage developmental psychology and gender-blindness in training, Amazing Racers is a must read for millions of runners and the millions more who strive for better performance.