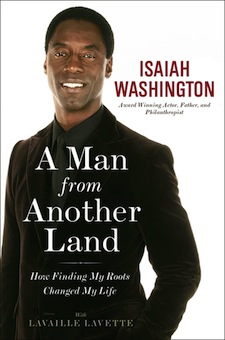 Former star of Grey’s Anatomy, Isaiah Washington, will be in Atlanta next month signing copies of “A Man From Another Land.”

Washington is an actor/producer and human rights activist. The SAG and NAACP Image Award-winning actor was born in Houston, Texas, and went on to attend Howard University and serve in the US Air force. During the Season 3 of Grey’s Anatomy, Washington became the center of a very public backstage controversy, resulting in his dismissal and later, co-star T.R. Knight’s coming out.

More recently, Washington attended the 63rd United Nations General Assembly in New York as an advisor to and member of President Ernest Bai Koroma of the Republic of Sierra Leone’s personal delegation. He’s also appeared in two films since his Grey’s Anatomy departure – The Least of These (2008) and Hurricane Season (2010) which went straight to video. His other films include Clockers (1995), Love Jones (1997), Romeo Must Die (2000) and Ghost Ship (2000 among many others. His TV appearances include Law & Order, NYPD Blue, New York Undercover, Ally McBeal, Soul Food, and the 2007 re-imagining of Bionic Woman.

From the Publisher
In this inspirational memoir, Grey’s Anatomy actor Isaiah Washington explains how filling in the gaps of his past led him to discover a new passion: helping those less fortunate. DNA testing revealed that Washington was descended from the Mende people, who today live in Sierra Leone. For many people, the story would end with the results of the search; for Isaiah, it had just begun. Discovering his roots has given him a new purpose, to lead an inspirational life defined by faith and charity.

After visiting Sierra Leone, and researching the country and its needs, Washington forged a strong relationship with the Mende people, and was inducted as Chief Gondobay Manga in May 2006. He established The Gondobay Manga Foundation to institute many improvements suggested by the country’s people, addressing educational concerns, practical issues (road building, water supply, and electricity), and rehabilitative projects.

Dual citizenship has been a dream of African-Americans such as W.E.B. DuBois, Martin Luther King, Jr. and Malcolm X, but Washington became the first to realize that honor in 2008. A twofold milestone, it was also the first time an African president granted citizenship based on DNA.

3 Comments on Isaiah Washington, Book Signing Event “A Man From Another Land”