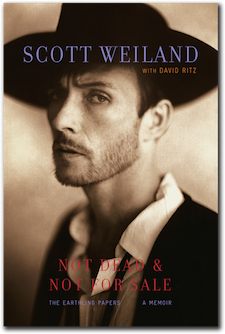 Stone Temple Pilots singer Scott Weiland will be signing copies of his memoir “Not Dead & Not For Sale.”

A musician, lyricist, and vocalist for the Grammy Award-winning rock band Stone Temple Pilots, Weiland is also known for his five years with the supergroup Velvet Revolver. Like many rock stars, his career has been checkered with drug addiction and arrests.

Weiland performed in his first bands as a teenager in Huntington Beach, CA. He cites this time as his first encounters with cocaine. He met bassist Robert DeLeo in 1986 at a Black Flag concert and soon after formed the band Mighty Joe Young with Dean DeLeo and Eric Kretz. After discovering that name was already taken by a blues singer, the band changed their name to Shirley Temple’s Pussy, and soon after to Stone Temple Pilots due to pressure form their label. Hence they did keep the initials – STP.

Stone Temple Pilots is one of the bands instrumental in the Seattle sound/ grunge rock movement, along with Soundgarden, Alice in Chains, Pearl Jam and the band that started it all – Nirvana. Scott Weiland has won two Grammys and has been nominated six times, along with winning numerous MTV, Billboard, and American Music awards.

From the Publisher
In the early 1990s, Stone Temple Pilots—not U2, not Nirvana, not Pearl Jam— was the hottest band in the world. STP toppled such mega-bands as Aerosmith and Guns N’ Roses on MTV and the Billboard charts. Lead singer Scott Weiland became an iconic front man in the tradition of Mick Jagger, David Bowie, and Robert Plant.

Then, when STP imploded, it was Weiland who emerged as the emblem of rock star excess, with his well-publicized drug busts and trips to rehab. Weiland has since made a series of stunning comebacks, fronting the supergroup Velvet Revolver, releasing solo work, and, most recently, reuniting with Stone Temple Pilots. He still struggles with the bottle, but he has prevailed as a loving, dedicated father, as well as a business-savvy artist whose well of creativity is far from empty.

These earthling papers explore Weiland’s early years as an altar boy right along with his first experiences with sex and drugs. Weiland discusses his complex relationships with his parents, stepfather, siblings, and the love of his life, Mary Forsberg Weiland. Readers learn the fascinating stories behind his most well-known songs and what it was like to be there at the beginning of the grunge phenomenon, as Rolling Stone proclaimed on its cover: “the year punk broke.” Not Dead & Not for Sale is a hard rock memoir to be reckoned with—a passionate, insightful, and at times humorous book that reads with extraordinary narrative force.

4 Comments on STP Frontman Scott Weiland, Book Signing “Not Dead & Not For Sale”