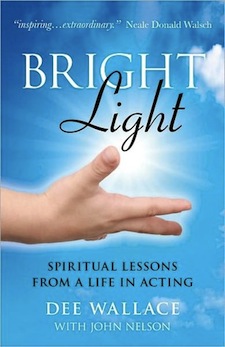 Star of The Howling and E.T., Dee Wallace, will be on the east coast next month signing copies of “Bright Light: Spiritual Lessons from a Life in Acting.”

Best known for her starring role as Elliot’s mother in Spielberg’s E.T. the Extra-Terrestrial, Wallace also appeared in a number of cult classics including, The Hills Have Eyes (1977), The Stepford Wives (1975), and Cujo (1983). She’s appeared in more than eighty-five films total, and today she is a healer and an acting coach.

A staple of the horror film genre, Wallace appeared in Rob Zombie’s 2007 retelling of the slasher film Halloween – the ninth film in the Halloween film series. She also appeared in the horror films The Ocean and Sebastian. In 1995 while she was filming The Frighteners, a film about a series of bizarre heart attack-related deaths, her husband died suddenly of a heart attack. Strange, indeed.

From Kansas City, Kansas, Wallace, born Deanna Bowers, graduated with an education degree from the University of Kansas and briefly taught high school drama at Washington High School in Kansas City before embarking on a career in film.

From the Publisher
Like you, Dee Wallace came in as a bright shiny light, and she knew from the beginning that her soul quest was to keep that light shining and share it with others. This was a challenge growing up poor in Kansas amidst all the conflicting religious and social messages of her upbringing. But she stuck to this strong intent and followed her knowingness in a meteoric rise as an actress, becoming an acting icon after only five years with the success of E.T., and then faltering and losing her way only to reclaim the power of that knowingness later in life. Bright Light works as an autobiographical tale of an actor’s life and craft, and how that journey applies to everyone’s spiritual journey. It is the story of Everyman: the reclaiming of Self. Each chapter of Dee Wallace’s story is characterized by a concept like intention, in which the narrative becomes an allegorical exploration of its qualities. Dee Wallace has rediscovered the wisdom that we all know but forget: that true success comes from following the heart’s lead, and that the mind only creates form for spirit’s creative manifestation. Our consciousness is our intelligence.