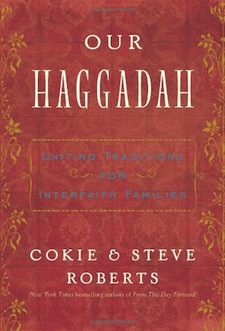 ABC News correspondent, Cokie Roberts, will be in the capital signing copies of “Our Haggadah: Uniting Traditions for Interfaith Families.” She’s a senior news analyst for National Public Radio, a political commentator for ABC News, and from 1996 to 2002 she co-anchored ABC’s “This Week” alongside Sam Donaldson.

Cokie Roberts is the bestselling author of three titles — “We Are Our Mothers’ Daughters,” “Ladies of Liberty” and “Founding Mothers.” Her latest, “Our Haggadah,” is co-authored with her husband and NPR political analyst Steve Roberts. Together the pair have also co-authored the New York Times bestseller “From This Day Forward.” Published by Harper, “Our Haggadah” was released on March 8, 2011.

About the book
New York Times bestselling authors and journalists Cokie and Steve Roberts share their Passover traditions in this engaging version of the Haggadah for couples and families of mixed faiths.

When they met more than forty years ago, Cokie and Steve Roberts found common ground in their shared values, despite their different religious beliefs. Choosing to honor both of their faiths and traditions, they began hosting a Passover Seder that has evolved from a small family gathering to a veritable event celebrated with loved ones from all walks of life.

Based on the time-honored Haggadah—the text read throughout the evening that gives order to the ritual meal—Our Haggadah is a practical guide for interfaith families, whether they’re celebrating their very first Passover or starting a new tradition. Originally composed on a typewriter and stapled together, Our Haggadah has been the Roberts family’s handbook for each Seder and comes from years of adapting and expanding their Seders to welcome all who wish to take part in the celebration. From finding a Seder plate to preparing traditional and nontraditional foods, from the customary prayers to new ways for guests to participate, Cokie and Steve share their special approach to the holiday and the lessons they’ve learned over the years as an interfaith couple.