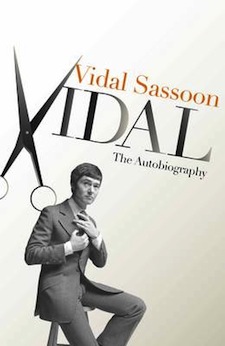 The world’s most famous hairdresser, “if you don’t look good we don’t look good” Vidal Sassoon, will be in West Hollywood next month signing copies of “Vidal: The Autobiography.”

Born in London in 1928, Vidal began his hairdressing career as an apprentice during World War II. In 2009 Sassoon was made a Commander of the Order of the British Empire in the Queen’s Birthday Honours.

A self-made man in the truest sense, Sassoon spent 7 years in a Jewish orphanage and attended Essendine Road Primary School before being evacuated to Holt, Wiltshire. After returning to his native London, Sassoon left school at the age of 14 and took a hairdressing apprenticeship. He’s noted for his innovative hairstyles and haircare products sold worldwide.

Vidal Sassoon’s extraordinary life has taken him from an impoverished childhood to global fame as the father of modern hairdressing, whose slick sharp cutting took the fashion world by storm. His memoir begins with surprising and often moving stories of his early life—his time at the Spanish & Portuguese Jewish orphanage in Maida Vale, warring with fascists in London’s East End, and fighting in the army of the fledgling state of Israel in the late 1940s. He then discusses his extraordinary career, during which he cut the hair of everyone who was anyone—including Mary Quant, Grace Coddington, Twiggy, Rita Hayworth, and Mia Farrow; launched salons all over the world; founded the hairdressing school that still bears his name; and became a global brand. He also shares the passions that drive him—architecture and beautiful women, Israel and anti-Semitism, family ties and season tickets at Chelsea. The compelling memoir of a genuine fashion icon who reinvented the hairdressers’ art.

Check out Vidal Sassoon in action