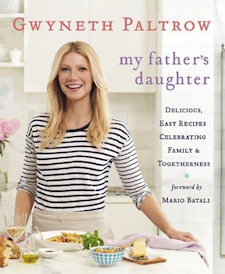 Actress Gwyneth Paltrow will be in New York City signing copies of her book of family recipes, “My Father’s Daughter.” Born into a Hollywood family, Gwyneth is the daughter of American actress Blythe Danner (Meet the Parents) and writer, TV/film director and producer Bruce Paltrow (St. Elsewhere).

She won an Oscar for her performance in Shakespeare in Love (though this writer thinks her personal best was the role of Margot Tenenbaum). Her first appearance on the screen was in 1991 in a little-known film starring John Travolta, called Shout, though most will remember seeing her first as young Wendy Darling in the Steven Spielberg directed fantasy, Hook. Once engaged to Brad Pitt in the late 90s (remember their matching hair cuts?), she’s now married to Coldplay frontman Chris Martin.

About the book
The Academy-Award winning actress and avid foodie shares a sumptuous collection of recipes and gorgeous photographs celebrating the joy of preparing food for loved ones, a passion she learned from her beloved father.

As an actress, author, trendsetter, creator of goop.com, and host of the popular PBS series, Spain: On the Road Again, Gwyneth Paltrow is an icon of style and good taste around the world. As a young girl eating and cooking with her father, Bruce Paltrow, she developed a passion for food that has shaped how she lives today and strengthened her belief that time with family is a priority. Now in MY FATHER’S DAUGHTER, Paltrow shares her favorite family recipes along with personal stories of growing up with her father, Bruce Paltrow. She discusses how he has influenced her in the food she loves, how she involves her kids in cooking, and how she balances healthy food with homemade treats. And, for the first time, Paltrow offers a glimpse into her life as daughter, mother and wife, sharing her thoughts on the importance of family and togetherness.

Complete with 150 delicious ideas for breakfast, sandwiches and burgers, soups, salads, main dishes, sides, and desserts, this beautifully illustrated book includes full-color photos throughout, many featuring Paltrow at home with her family and friends. MY FATHER’S DAUGHTER is a luscious collection that will inspire readers to cook great food with the people who mean the most to them.