Please verify each book signing event with the bookshop.

Signed Deluxe Edition of “The Fall of Numenor”

If you are not able to attend any of these events and would still like a signed copy of The Fall of Numenor, we will be making the slipcased Signed Deluxe Edition available for purchase in November. Be sure to sign up to the waiting list below. All books are available on a “first come, first served” basis. This signed deluxe edition of Tolkien’s new book is destined to be a highly sought after collector’s edition. Signed by Alan Lee and Brian Sibley 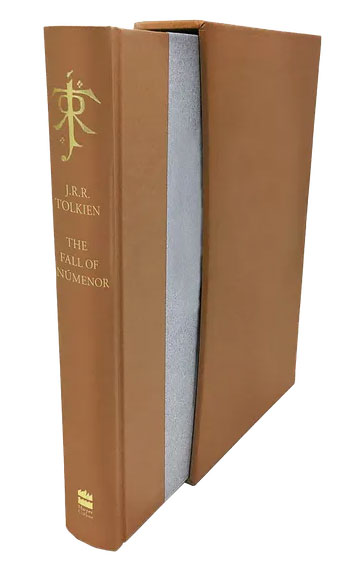 J.R.R. Tolkien’s writings on the Second Age of Middle-earth, collected for the first time in one deluxe slipcased edition.

J.R.R. Tolkien famously described the Second Age of Middle-earth as a ‘dark age, and not very much of its history is (or need be) told’.

And for many years readers would need to be content with the tantalising glimpses of it found within the pages of The Lord of the Rings and its appendices, including the forging of the Rings of Power, the building of the Barad-dur and the rise of Sauron.

It was not until Christopher Tolkien published The Silmarillion after his father’s death that a fuller story could be told. Although much of the book’s content concerned the First Age of Middle-earth, there were at its close two key works that revealed the tumultuous events concerning the rise and fall of the island of Numenor.

Raised out of the Great Sea and gifted to the Men of Middle-earth as a reward for aiding the angelic Valar and the Elves in the defeat and capture of the Dark Lord Morgoth, the kingdom became a seat of influence and wealth; but as the Numenoreans’ power increased, the seed of their downfall would inevitably be sown, culminating in the Last Alliance of Elves and Men.

Even greater insight into the Second Age would be revealed in subsequent publications, first in Unfinished Tales of Numenor and Middle-earth, then expanded upon in Christopher Tolkien’s magisterial twelve-volume The History of Middle-earth, in which he presented and discussed a wealth of further tales written by his father, many in draft form.

Now, adhering to the timeline of ‘The Tale of Years’ in the appendices to The Lord of the Rings, editor Brian Sibley has assembled into one comprehensive volume a new chronicle of the Second Age of Middle-earth, told substantially in the words of J.R.R. Tolkien from the various published texts, with new illustrations in watercolour and pencil by the doyen of Tolkien art, Alan Lee. 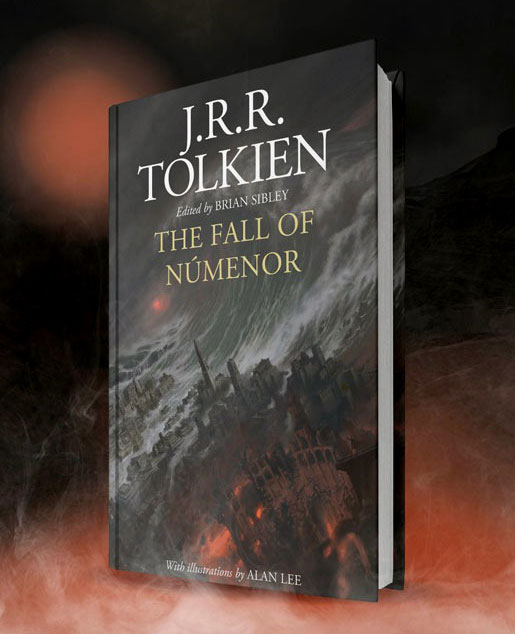 John Ronald Reuel Tolkien CBE FRSL (3 January 1892 – 2 September 1973) was an English writer and philologist. He was the author of the high fantasy works The Hobbit and The Lord of the Rings.

From 1925 to 1945, Tolkien was the Rawlinson and Bosworth Professor of Anglo-Saxon and a Fellow of Pembroke College, both at the University of Oxford. He then moved within the same university to become the Merton Professor of English Language and Literature and Fellow of Merton College, and held these positions from 1945 until his retirement in 1959. Tolkien was a close friend of C. S. Lewis, a co-member of the informal literary discussion group The Inklings. He was appointed a Commander of the Order of the British Empire by Queen Elizabeth II on 28 March 1972.

After Tolkien’s death, his son Christopher published a series of works based on his father’s extensive notes and unpublished manuscripts, including The Silmarillion. These, together with The Hobbit and The Lord of the Rings, form a connected body of tales, poems, fictional histories, invented languages, and literary essays about a fantasy world called Arda and, within it, Middle-earth. Between 1951 and 1955, Tolkien applied the term legendarium to the larger part of these writings.

While many other authors had published works of fantasy before Tolkien, the great success of The Hobbit and The Lord of the Rings led directly to a popular resurgence of the genre. This has caused him to be popularly identified as the “father” of modern fantasy literature—or, more precisely, of high fantasy. 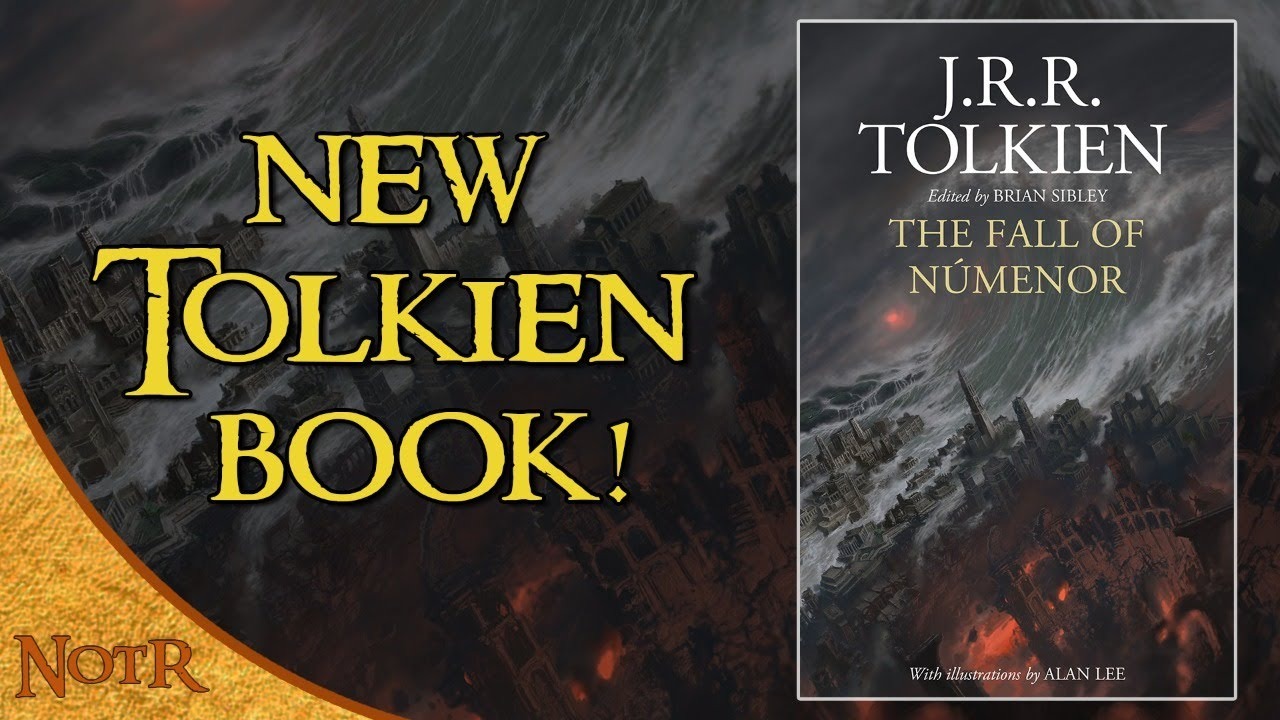 Alan Lee (born 20 August 1947) is an English book illustrator and film conceptual designer. He is best known for his artwork inspired by J. R. R. Tolkien’s fantasy novels, and for his work on the conceptual design of Peter Jackson’s film adaptations of Tolkien, The Lord of the Rings and The Hobbit film series. 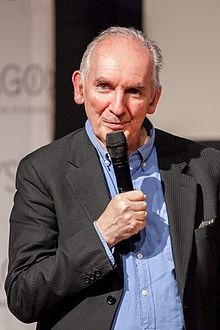 The Fall of Númenor: and Other Tales from the Second Age of Middle-earth

HarperCollins is proud to announce the publication in November 2022 of THE FALL OF NÚMENOR by J.R.R. Tolkien, edited by writer and Tolkien expert, Brian Sibley, and illustrated by acclaimed artist, Alan Lee. The book will be published globally by HarperCollinsPublishers and in other languages by numerous Tolkien publishers worldwide.

Presenting for the first time in one volume the events of the Second Age as written by J.R.R. Tolkien and originally and masterfully edited for publication by Christopher Tolkien, this new volume will include pencil drawings and colour paintings by Alan Lee, who also illustrated The Lord of the Rings and The Hobbit and went on to win an Academy Award for his work on The Lord of the Rings film trilogy.

J.R.R. Tolkien famously described the Second Age of Middle-earth as a ‘dark age, and not very much of its history is (or need be) told’. And for many years readers would need to be content with the tantalizing glimpses of it found within the pages of The Lord of the Rings and its appendices.

It was not until Christopher Tolkien presented The Silmarillion for publication in 1977 that a fuller story could be told for, though much of its content concerned the First Age of Middle-earth, there were at its close two key works that revealed the tumultuous events concerning the rise and fall of the island-kingdom of Númenor, the Forging of the Rings of Power, the building of the Barad-dûr and the rise of Sauron, and the Last Alliance of Elves and Men.

Christopher Tolkien provided even greater insight into the Second Age in Unfinished Tales of Númenor and Middle-earth in 1980, and expanded upon this in his magisterial 12-volume History of Middle-earth, in which he presented and discussed a wealth of further tales written by his father, many in draft form.

The Hobbit was first published in 1937 and The Lord of the Rings in 1954–5. Each has since gone on to become a beloved classic of literature and an international bestseller translated into more than 70 languages, collectively selling more than 150,000,000 copies worldwide. Published in 1977, The Silmarillion sold more than one million copies in its first year of publication and has gone on to be translated into almost 40 languages.

Brian Sibley says: ‘Since the first publication of The Silmarillion forty-five years ago, I have passionately followed Christopher Tolkien’s meticulous curation and scholarship in publishing a formidable history of his father’s writings on Middle-earth. I am honoured to be adding to that authoritative library with The Fall of Númenor. I hope that, in drawing together many of the threads from the tales of the Second Age into a single work, readers will discover – or rediscover – the rich tapestry of characters and events that are a prelude to the drama of the War of the Ring as is told in The Lord of the Rings.

Alan Lee says: ‘It is a pleasure to be able to explore the Second Age in more detail, and learn more about those shadowy and ancient events, alliances and disasters that eventually led to the Third Age stories we are more familiar with. Wherever I had the opportunity when working on The Lord of the Rings and The Hobbit, I tried to imbue pictures and designs with an appropriate antiquity, an overlayering of history and of echoes of those older stories, and The Fall of Númenor has proved a perfect opportunity to dig a little deeper into the rich history of Middle-earth.’

The Fall of Númenor will be published by HarperCollins with a simultaneous global publication date of November 2022, and subsequently in translation around the world.

The streaming series, The Rings of Power, set during the Second Age of Middle-earth, will be released by Amazon Prime in September 2022.