Join for a virtual event with Emmy Award-winning journalist Ilia Calderón to discuss her new book, “My Time to Speak: Reclaiming Ancestry and Confronting Race.”

Ilia Calderón is an Emmy Award–winning journalist, the coanchor of Univision’s flagship evening newscast Noticiero Univision, and cohost of Univision’s primetime news magazine Aquí y Ahora. She is the first Afro-Latina to anchor a national weekday evening newscast for a major Hispanic broadcast network in the United States, having previously coanchored three other news desks for Univision and two for Telemundo. She currently resides in Miami, Florida, with her husband and daughter. 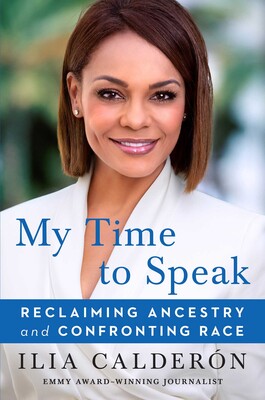 An inspiring, timely, and conversation-starting memoir from the barrier-breaking and Emmy Award–winning journalist Ilia Calderón—the first Afro-Latina to anchor a high-profile newscast for a major Hispanic broadcast network in the United States—about following your dreams, overcoming prejudice, and embracing your identity.

As a child, Ilia Calderón felt like a typical girl from Colombia. In Chocó, the Afro-Latino province where she grew up, your skin could be any shade and you’d still be considered blood. Race was a non-issue, and Ilia didn’t think much about it—until she left her community to attend high school and college in Medellín. For the first time, she became familiar with horrifying racial slurs thrown at her both inside and outside of the classroom.

From that point on, she resolved to become “deaf” to racism, determined to overcome it in every way she could, even when she was told time and time again that prominent castings weren’t “for people like you.” When a twist of fate presented her the opportunity of a lifetime at Telemundo in Miami, she was excited to start a new life, and identity, in the United States, where racial boundaries, she believed, had long since dissolved and equality was the rule.

Instead, in her new life as an American, she faced a new type of racial discrimination, as an immigrant women of color speaking to the increasingly marginalized Latinx community in Spanish.

Now, Ilia draws back the curtain on the ups and downs of her remarkable life and career. From personal inner struggles to professional issues—such as being directly threatened by a Ku Klux Klan member after an interview—she discusses how she built a new identity in the United States in the midst of racially charged violence and political polarization. Along the way, she’ll show how she’s overcome fear and confronted hate head on, and the inspirational philosophy that has always propelled her forward.