Join Chip Jones at Chop Suey Books for a socially distanced signing of his new book, “The Organ Thieves: The Shocking Story of the First Heart Transplant in the Segregated South.”

Chip Jones has been reporting for nearly thirty years for the Richmond Times-Dispatch, The Roanoke Times, Virginia Business magazine, and others. As a reporter for The Roanoke Times, he was nominated for a Pulitzer Prize for his work on the Pittston coal strike. He is the former communications director of the Richmond Academy of Medicine, which is where he first discovered the heart stopping story in The Organ Thieves. 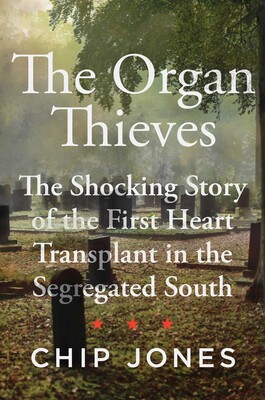 The Immortal Life of Henrietta Lacks meets Get Out in this landmark investigation of racial inequality at the core of the heart transplant race.

In 1968, Bruce Tucker, a black man, went into Virginia’s top research hospital with a head injury, only to have his heart taken out of his body and put into the chest of a white businessman. Now, in The Organ Thieves, Pulitzer Prize–nominated journalist Chip Jones exposes the horrifying inequality surrounding Tucker’s death and how he was used as a human guinea pig without his family’s permission or knowledge. The circumstances surrounding his death reflect the long legacy of mistreating African Americans that began more than a century before with cadaver harvesting and worse. It culminated in efforts to win the heart transplant race in the late 1960s.

Featuring years of research and fresh reporting, The Organ Thieves is a story that resonates now more than ever, when issues of race and healthcare are the stuff of headlines and horror stories.