Erik Segall will sign copies of “Not Yet” in CO next month.

Erik Segall earned a BA in Creative Writing from the University of Southern Colorado and a Master of Arts in the Eastern Classics from St. John’s College. He taught for several years at the Colorado School for the Deaf and Blind and worked as a contributing writer for the Pueblo Chieftain, Colorado’s oldest daily newspaper. He volunteered at the Pueblo Suicide Prevention Center until its untimely demise and currently serves on the Suicide Prevention Coalition of Pueblo County.

He currently holds the rank of 4th degree Black Belt and teaches a women’s self-defense class. 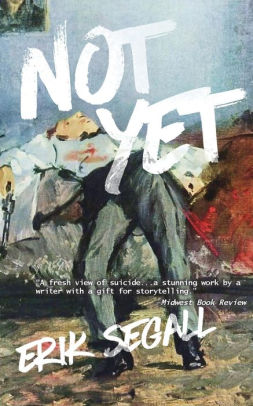 Aaron Clifton, a social worker at the Suicide Prevention & Crisis Hotline Center, is tormented by the request to help his ailing grandmother kill herself.

A literary, psychological novel imbued with social commentary, Not Yet reflects on the depressive conditions that lead to suicide. This introspective, in-depth character study of a single father, who is utterly surrounded by women, details the emotional struggle of raising a teenage daughter while confronting the imminent demise of his grandmother slowly engulfed by Alzheimer’s. The dark theme of suicide is uplifted by musings on race, religion, history and feminism, and with humor occurring suddenly in the midst of dialogue-driven Socratic therapy. Not Yet offers a temporally-deconstructed glimpse of a man conflicted by the contemplation of assisting his grandmother in death.