John Daly is signing copies of “Safeguard” in CO next month.

John A. Daly graduated from the University of Northern Colorado with a degree in business administration and computer information systems. With a thirst for creative expression that went beyond computer programming, John developed an interest in writing. He currently writes political, cultural, and media analysis columns for multiple national news websites, when he’s not working on the next Sean Coleman thriller. 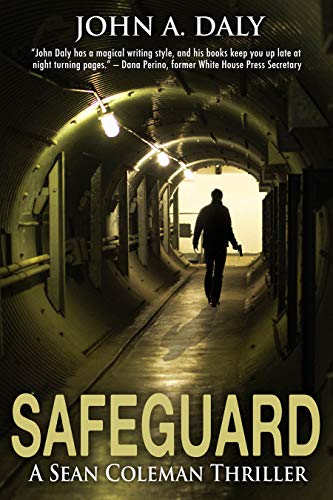 “Safeguard is a fast, fun page-turner whose twists and turns kept me reading well into the night. John Daly delivers his mix of wry humor with pulse pounding action that keeps you guessing til the very end. An entertaining, engaging read.”
– Megyn Kelly, journalist and #1 New York Times bestselling author

Months after a life-altering revelation drove Sean Coleman from his mountain hometown of Winston, Colorado, the longtime security guard has found stable work as the sole caretaker of a retired nuclear missile site along the Eastern Plains. The desolate Cold War era facility now serves as a rarely visited museum and records archive, and provides perhaps the perfect job for a lonesome, headstrong man working to erase the painful memories of his past.

But as Sean soon discovers, the forgotten compound has piqued new, unwelcome interest. A mysterious group of armed individuals, frighteningly cultish in their methods, work to cut off communications with the outside world and take over the facility by any means necessary. Though their dark purpose is ultimately exposed, Sean suspects their charismatic leader is guided by even more sinister motivations — motivations that can prove more deadly than anyone could possibly imagine.

What was supposed to be a lazy Monday evening turns into a savage battle of survival and a close-quarters race against time as Sean fights for his life, liberty, and the things he’d left behind.