Chris Colfer, star of “Glee”, is signing copies of “A Tale of Magic…” at multiple locations during October.

Chris Colfer is a #1 New York Times bestselling author and Golden Globe-winning actor. He was honored as a member of the TIME 100, Time magazine’s annual list of the one hundred most influential people in the world, and his books include Struck By Lightning: The Carson Phillips Journal, Stranger Than Fanfiction, and the books in The Land of Stories series: The Wishing Spell, The Enchantress Returns, A Grimm Warning, Beyond the Kingdoms, An Author’s Odyssey, and Worlds Collide, and the companion books A Treasury of Classic Fairy Tales, The Mother Goose Diaries, Queen Red Riding Hood’s Guide to Royalty, The Curvy Tree, and Trollbella Throws a Party. 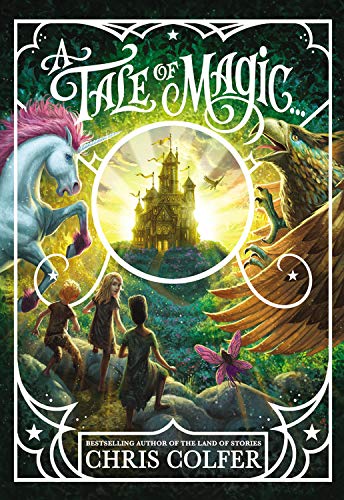 A new series set in the Land of Stories universe from the #1 New York Times bestselling author, Chris Colfer, perfect for new and old fans!

When Brystal Evergreen stumbles across a secret section of the library, she discovers a book that introduces her to a world beyond her imagination and learns the impossible: She is a fairy capable of magic! But in the oppressive Southern Kingdom, women are forbidden from reading and magic is outlawed, so Brystal is swiftly convicted of her crimes and sent to the miserable Bootstrap Correctional Facility.
But with the help of the mysterious Madame Weatherberry, Brystal is whisked away and enrolled in an academy of magic! Adventure comes with a price, however, and when Madame Weatherberry is called away to attend to an important problem, she doesn’t return.
Do Brystal and her classmates have what it takes to stop a sinister plot that risks the fate of the world, and magic, forever?
Fall in love with an all-new series from Chris Colfer, the #1 New York Times bestselling author of the Land of Stories, filled with adventure, imagination, and wonderfully memorable characters both familiar and new.