OJ Smith will be signing copies of “Healthy Marriages” in OH this month.

Education Background: B.A. Communications, Kent State UniversityProfession: Retired, Sales Director at The Hershey CompanyOJ is passionate about youth and Christian educational development.In his spare time, OJ enjoys playing bass guitar and coaching youth athletics which has in past included his son’s basketball teams and a youth Pop Warner football team that won a national championship. Most recently, OJ coached CCS Junior High basketball and football teams. Professional Accomplishments: In nearly 30 years with The Hershey Company, OJ held several different leadership positions within several US markets. During his time in Dayton, Cincinnati, Toledo, Detroit, St Louis and Dallas. OJ has always managed to advance and develop strong and effective business relationships. In addition, OJ used his unique ability to think “outside the box” which opened the door to creative, strategic relationships with several professional sporting teams such as the St. Louis Cardinals, St. Louis Rams, St. Louis Blues, Texas Rangers, Cincinnati Reds and Cleveland Indians. One of OJ’s greatest attributes is his magnetic personality and his ability to motivate and develop new talent. OJ was identified as one of the company’s most effective people developers both internally and externally. Personal Testimony: “I met my Savior at the early youthful age of 12. Like most Christian, I was put into compromising situations from time to time where I had to make key decisions that would shape my Christian walk for the the rest of my life. Growing up in an inner-city environment with a single parent, I began to learn that these decisions were sometimes life and death. As I grew in Christ, I began to learn the value of giving alms in my places of worship. I found myself giving my time and skill sets in an effort to help develop the ministry and the mission of the churches I would attend. The two pivotal moments in my Christian walk today include February, 1993 – while struggling with my finances, I was given the spiritual understanding of tithes, offering, alms giving and gaining stewardship of your finances. The other was my adoption of scripture Mark 2:2, which exemplifies the strongest faith walk and the reward for not letting any obstacle deter us from getting into HIS presence.”Family: OJ is married to Lisa for more than 31 years. The two met while in college at Kent State University and married 5 years later.We are the proud parents of 2 kids, Brandon and Candace 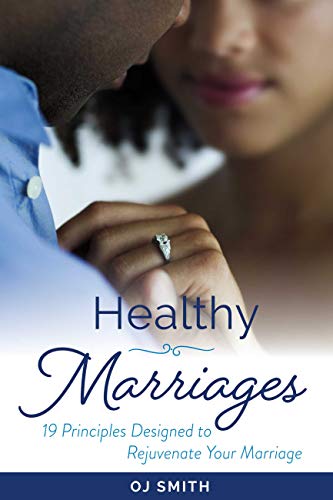 Healthy Marriages is a book based on 19 principles designed to rejuvenate your marriage. In addition to these basic principles this book places emphasis on effective communication. Becoming A Better Communicator in Dialogue (The ABCnD’s) of communication.
It also emphasizes the powerful value of Self Conviction. a first step in moving towards resolution. This book will introduce you to several real life couples who have put many of these principles to practice for positive outcomes. It will also introduce you to several couples who have missed the opportunity and the impact to their relationship.
This book is written in acronymic form which makes it an easy and enjoyable read.
Some of the principles include
Happy Hearted – creating your union out of mutual feelings
Engaging – always being engaging in one another and the relationship
Alienation – never allowing things, people or circumstances lead one to alienate from the other
Unlike most other marital books this book is written from a layman’s perspective. I don’t profess to be perfect, nor a theologian or professional marriage counselor. I’m just a guy who’s married 31 years and have put these practices into action in an effort to keep my marriage moving forward.