Eliza Ames is signing copies of “Something Special” in CA this month.

Eliza Ames lives in San Bernardino, CA with her two sons, and a plethora of pets. She enjoys her California home, but has never forgotten her Wyoming roots and often includes homage to pieces of the Equality State in her writing. She fell in love with books when she was six and has loyally maintained the relationship ever since. Most of her time is spent doing mom-stuff or trying to earn a living. But in her spare time, if she isn’t writing, she’s reading or listening to audio books. Eliza creates unique worlds in the fantasy genre, generally for young adult and new adult audiences, but has also recently put out a contemporary romance set in Provo, UT. She believes an imagination is a terrible thing to waste so you can expect unique characters, crazy creatures, and places where scientific rules may or may not apply. 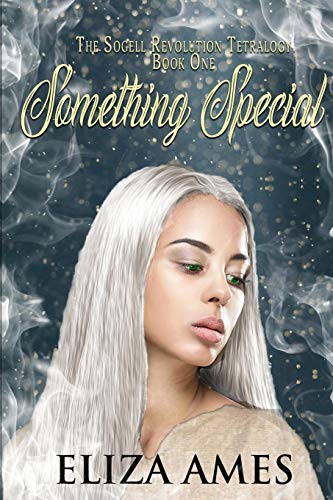 Zalene Ayel left the safety of her home with one goal in mind – saving her ten-year-old brother Pariev from slave traders. That was before she fell through an icy lake and drowned.

She should be dead, and yet she finds herself with the Qataeba (the most hunted race of people on the continent) as part of a chain of events set in motion by the greatest sage her world has ever known, who also happens to be the brother she meant to rescue.

By allowing himself to be placed in peril at that time, Pariev has shaken his whole family into action against the slave trade, and led Zalene to the one place where she can make the most difference. Families who were divided can be reunited, but only if she’s brave enough to be part of something special.