Edward Lee Smith, Lt. Col., Ret. will be signing copies of his book “Forgotten Heroes”, his biography of his life and career in the military at NM next month. 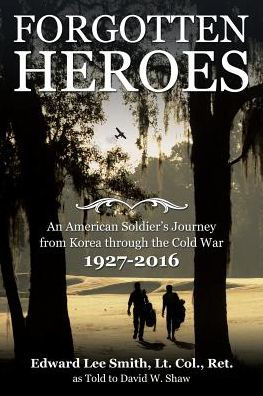 When author Edward Lee Smith set out to write about his life as an African American soldier and teacher in America during the tumultuous twentieth century, he had a very personal mission in mind. He needed to confront his demons. Smith and his twin brother, Fred, encountered some of the bloodiest combat in the Korean War as rimen with the Seventh Infantry Division of the US Army.

In Forgotten Heroes, he shares his life story—from his birth in Philadelphia, Pennsylvania; to growing up in North Carolina during the Great Depression under the oppressive Jim Crow laws that pervaded the South; to his relatively happy teen years during World War II; to the bloody combat in Korea during the countero ensive of 1951; to joining the National Guard and working his way up to lieutenant colonel.

As an African American of advanced age, Smith shares how he lived through Jim Crow, the Ku Klux Klan, war, the civil rights movement, economic booms and busts, the birth of rock ’n’ roll, the free love and drugs of the 1960s, the assassination of Martin Luther King Jr., the women’s liberation movement, the tech bubble, and the Great Recession.