Judge Jeanine Pirro, Fox TV Host of Justice with Judge Jeanine, will be signing copies of “Liars, Leakers, and Liberals: The Case Against the Anti-Trump Conspiracy” in NJ this month.

Jeanine Pirro is the host of Fox News’ Justice with Judge Jeanine. Previously, she hosted Judge Jeanine Pirro, a syndicated court show for which she won an Emmy. In 1990, she became the first elected female to sit on the Westchester County court bench. In 1993, Judge Pirro was the first female elected district attorney of Westchester County, once again setting a precedent. As D.A., she received national recognition for founding one of the nation’s first domestic violence units and has tirelessly crusaded on behalf of the silent victims of violent crime. She also created one of the first operations to catch Internet pedophiles. Judge Pirro has two children and one dog, and she lives in Westchester, New York. 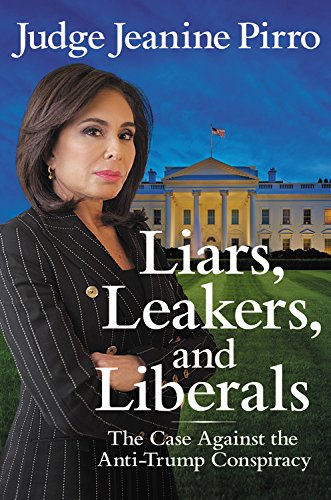 As host of her own show on Fox for many years, Judge Jeanine Pirro has seen firsthand how narratives take form, whether they are based in truth or not. In her explosive new book, she will write about some of the most egregious lies she’s seen, and take on the Liars, Leakers, and Liberals.