Retta, star of “Parks and Recreation”, will be signing copies of “So Close To Being The Sh*t” in various locations across the country during May and June. 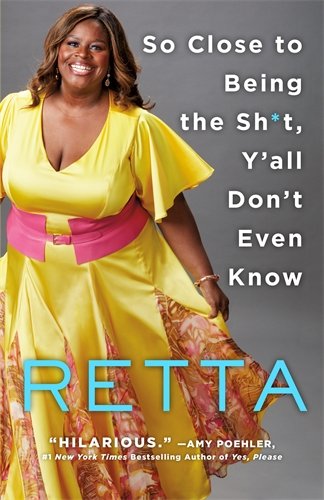 In her hilarious book of essays, Parks and Recreation star Retta shares the stories that led to her success in Hollywood.

In So Close to Being the Sh*t, Y’all Don’t Even Know, Parks and Recreation star Retta takes us on her not-so-meteoric rise from roaches to riches (well, rich enough that she can buy $15,000 designer handbags yet scared enough to know she’s always a heartbeat away from ramen with American cheese).

Throwing her hard-working Liberian parents for a loop, Retta abandons her plan to attend med school after graduating Duke University to move to Hollywood to star in her own sitcom?like her comedy heroes Lucille Ball and Roseanne.

Say what? Word. Turns out Retta might actually be on to something. After winning Comedy Central’s stand-up competition, she should be ready for prime time?but a fear of success derails her biggest dream.

Whether reminiscing about her days as a contract chemist at GlaxoSmithKline, telling “dirty” jokes to Mormons, feeling like the odd man out on Parks, fending off racist trolls on Twitter, flirting with Michael Fassbender, or expertly stalking the cast of “Hamilton,” Retta’s unique voice and refreshing honesty will make you laugh, cry, and laugh so hard you’ll cry.

Her eponymous sitcom might not have happened yet, but by the end of So Close to Being the Sh*t, you’ll be rooting for Retta to be the next one-named wonder to take over your television. And she just might inspire you to reach for the stars, too.