Rashad Jennings, former NY Giants running back, will be signing copies of “The IF In Life” in NJ and CA during May.

Retired NFL running back, Rashad Jennings is an impactful influencer, inspirational speaker, and nationally recognized personality. Throughout his successful eight-year career in the NFL, as well as during his championship-winning Season 24 on Dancing With the Stars, Rashad gained the love and support of fans throughout the country.

Today, Rashad is driven to make a national impact and lasting legacy through The Rashad Jennings Foundation, established in 2013. This award-winning foundation is dedicated to inspiring youth through the foundation’s Flagship Literacy program which is currently successfully implemented in 12 of the 32 NFL cities, in addition to providing mentorship and promoting health and fitness nationwide. Follow Rashad on Twitter, Instagram, Snapchat, and Facebook @rashadjennings. 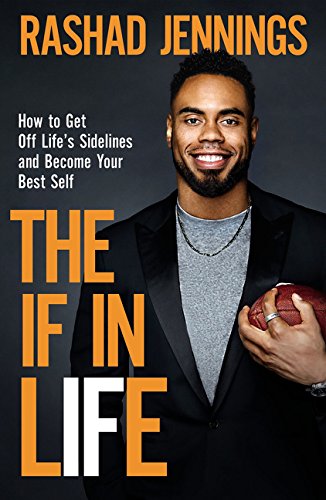 In his debut book, The IF in Life: How to Get Off Life’s Sidelines and Become Your Best Self, former NFL running back and Dancing with the Stars champion Rashad Jennings shares his inspiring story and experiences that will encourage readers to follow their dreams.

As a kid, Rashad was overweight, had poor vision, asthma, and a 0.6 GPA yet he still hoped to one day play in the NFL. The odds were stacked against him, but through hard work and determination, Rashad became a record-setting running back who has played with the Jacksonville Jaguars, the Oakland Raiders, and the New York Giants.

In The IF in Life, Rashad writes about the decisions that shaped his life. From overcoming injuries and setbacks to reaching goals and everything in between, Rashad’s transparency about his journey will encourage readers to hold on to faith in the midst of uncertainty and win big in life.