Marion Ross (& Donny Most), star of “Happy Days”, will be signing copies of “My Days” in CA this month.

Born in Minnesota, actress Marion Ross made her film debut in 1953’s Forever Female, starring Ginger Rogers and William Holden. After working steadily in movies and television, she became famous for playing Mrs. C. on the iconic sitcom Happy Days, which aired from 1974-84, and for which she received two Primetime Emmy Award nominations. Since then, she has worked on such series as The Drew Carey Show, Touched by an Angel, Nurse Jackie, and The Middle. Ms. Ross has two grown children and lives in California.

Don Most (born August 8, 1953) is an American actor best known for his role as Ralph Malph on the television series Happy Days.

Most had a role as a regular cast member on Happy Days, appearing through to the final (11th) season. Most has appeared in other film and television work. Film credits include EDtv (1999), Planting Melvin (2005) and The Great Buck Howard (2008). He also made the regular round of guest appearances on TV shows like Emergency!, CHiPs, Baywatch, The Love Boat, Sliders, Star Trek: Voyager, Diagnosis: Murder and Glee. He also made an appearance on Charles in Charge, alongside his former Happy Days co-star, Scott Baio. He plays a man who has just won the lottery and, as part of the cameo joke, he runs up to Scott Baio and waving the winning ticket shouts, “It looks like Happy Days are here again!” He also receives several looks from Scott Baio that suggests familiarity throughout the episode. He is sometimes credited as “Donny Most.” 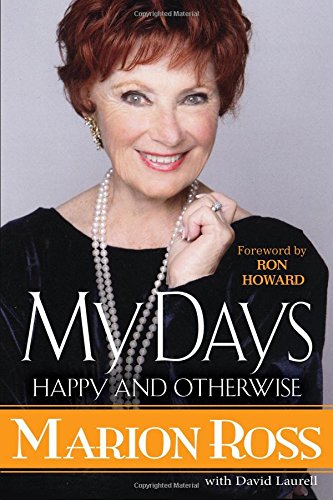 For eleven seasons, Marion Ross was head of one of America’s favorite television households. Now meet the lovable real-life woman behind the Happy Days mom . . .

Before she was affectionately known to millions as “Mrs. C.,” Marion Ross began her career as a Paramount starlet who went on to appear in nearly every major TV series of the 1950s and 1960s—including Love, American Style, in which she donned an apron that would cinch her career. Soon after came the fateful phone call from producer Garry Marshall that made her an “overnight” success, and changed her life . . .

In this warm and candid memoir, filled with loving recollections from the award-winning Happy Days team—from break-out star Henry Winkler to Cunningham “wild child” Erin Moran—Ross shares what it was like to be a starry-eyed young girl with dreams in poor, rural Minnesota, and the resilience, sacrifices, and determination it took to make them come true. She recalls her early years in the business, being in the company of such luminaries as Humphrey Bogart, Lauren Bacall, and Noel Coward, yet always feeling the Hollywood outsider—a painful invisibility that mirrored her own childhood. She reveals the absolute joys of playing a wife and mother on TV, and the struggles of maintaining those roles in real life. But among Ross’s most heart-rending recollections are those of finally finding a soulmate—another secret hope of hers made true well beyond her expectations.

Funny, poignant, and revealing—and featuring Garry Marshall’s final illuminating interview—as well as a touching foreword from her “TV son” Ron Howard, and a conversation with her real-life son and daughter, Marion Ross’s story is one of inspiration, persistence, and gratitude. It’s also a glowing tribute to all those who fulfilled her dreams—and in turn, gave us some of the happiest days of our own lives.