This book signing event is now over but you can still order a Signed First Edition of FAITH here. It is a first edition, first printing, and personally signed by President Jimmy Carter at the Jimmy Carter Presidential Library.

Jimmy Carter, former President of the US, will be signing copies of “Faith” in Atlanta, GA this month.

Jimmy Carter was the thirty-ninth President of the United States, serving from 1977 to 1981. In 1982, he and his wife founded The Carter Center, a nonprofit organization dedicated to improving the lives of people around the world. Carter was awarded the Nobel Peace Prize in 2002. He is the author of thirty books, including A Full Life: Reflections at Ninety; A Call to Action: Women, Religion, Violence, and Power; An Hour Before Daylight: Memoirs of a Rural Boyhood; and Our Endangered Values: America’s Moral Crisis. 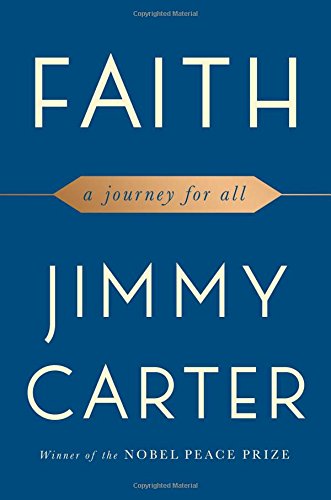 In this powerful reflection, President Jimmy Carter contemplates how faith has sustained him in happiness and disappointment. He considers how we may find it in our own lives.

All his life, President Jimmy Carter has been a courageous exemplar of faith. Now he shares the lessons he learned. He writes, “The issue of faith arises in almost every area of human existence, so it is important to understand its multiple meanings. In this book, my primary goal is to explore the broader meaning of faith, its far-reaching effect on our lives, and its relationship to past, present, and future events in America and around the world. The religious aspects of faith are also covered, since this is how the word is most often used, and I have included a description of the ways my faith has guided and sustained me, as well as how it has challenged and driven me to seek a closer and better relationship with people and with God.”

As President Carter examines faith’s many meanings, he describes how to accept it, live it, how to doubt and find faith again. A serious and moving reflection from one of America’s most admired and respected citizens.