Patti LaBelle is one of the most successful and beloved entertainers of our time. She has earned two Grammy Awards, three Emmy nominations, and is the only celebrity whose star on the Hollywood Walk of Fame was paid for entirely by fans. She continues to tour to sold-old concert halls across the world, and will appear on the 2016 season of the hit show The Voice. Patti is also an award-winning author of five books, three of which were New York Times bestsellers. She is the host of Patti LaBelle’s Place on the Cooking Channel, and the creator of Patti’s Sweet Potato Pie. She lives in Philadelphia. 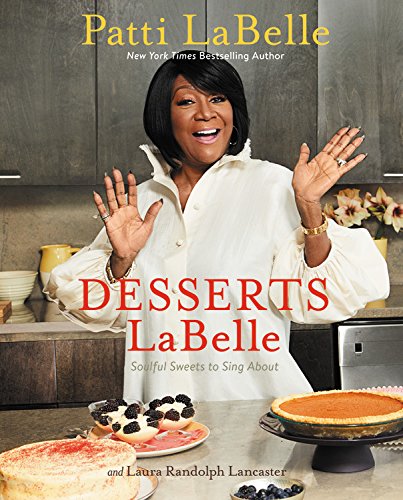 Her New York Times bestseller LaBelle Cuisine: Recipes to Sing About, which sold more than 300,000 copies, established her as a cooking star. Today, Patti’s baking skills have the country buzzing. In Fall 2015, a fan’s YouTube review of her sweet potato pie became a viral sensation, with over 20 million views. In just one weekend, her pies were completely sold out at Wal-Mart stores across the country.
Now, for the first time, fans of Patti’s pie can make their own, as well as other amazing sweets! Filled with her favorite recipes for pies, cakes, cookies, and puddings, as well as a chapter on diabetic-friendly recipes, moving personal stories from her career and life, this is the most personal cookbook LaBelle has written. Every fan of soul and sweets will want to own it.