Chipper Jones, former Atlanta Braves great, will be signing copies of “Ballplayer” at various locations across the country.

Larry Wayne “Chipper” Jones Jr. was a third baseman who spent his entire nineteen-year MLB career playing for the Atlanta Braves and all twenty-three years as a professional baseball player in the Braves organization. An eight-time All-Star and the 1999 National League MVP, he retired in 2012.  Born and raised in Florida, he now lives in Atlanta, Georgia.

Carroll R. Walton is a freelance sports journalist who covered the Braves for nearly twenty years as a beat writer for both the Atlanta Journal-Constitution and the Macon, Georgia, Telegraph. She lives in her hometown of Charlotte, North Carolina, with her husband and son. 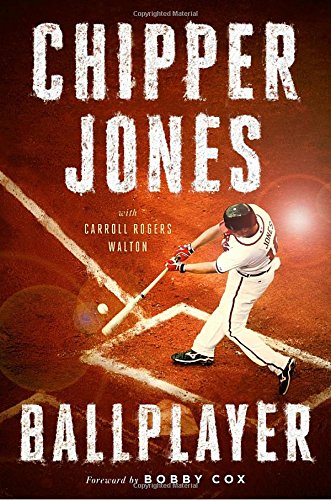 Atlanta Braves third baseman Chipper Jones—one of the greatest switch-hitters in baseball history—shares his remarkable story, while capturing the magic nostalgia that sets baseball apart from every other sport.

Before Chipper Jones became an eight-time All-Star who amassed Hall of Fame–worthy statistics during a nineteen-year career with the Atlanta Braves, he was just a country kid from small town Pierson, Florida. A kid who grew up playing baseball in the backyard with his dad dreaming that one day he’d be a major league ballplayer.

With his trademark candor and astonishing recall, Chipper Jones tells the story of his rise to the MLB ranks and what it took to stay with one organization his entire career in an era of booming free agency. His journey begins with learning the art of switch-hitting and takes off after the Braves made him the number one overall pick in the 1990 draft, setting him on course to become the linchpin of their lineup at the height of their fourteen-straight division-title run.

Ballplayer takes readers into the clubhouse of the Braves’ extraordinary dynasty, from the climax of the World Series championship in 1995 to the last-gasp division win by the 2005 “Baby Braves”; all the while sharing pitch-by-pitch dissections of clashes at the plate with some of the all-time great starters, such as Clemens and Johnson, as well as closers such as Wagner and Papelbon. He delves into his relationships with Bobby Cox and his famous Braves brothers—Maddux, Glavine, Smoltz, among them—and opponents from Cal Ripken Jr. to Barry Bonds. The National League MVP also opens up about his overnight rise to superstardom and the personal pitfalls that came with fame; his spirited rivalry with the New York Mets; his reflections on baseball in the modern era—outrageous money, steroids, and all—and his special last season in 2012.

Ballplayer immerses us in the best of baseball, as if we’re sitting next to Chipper in the dugout on an endless spring day.