Carli Lloyd, US women’s soccer star, will be signing copies of “When Nobody Was Watching” at various locations across the country.

CARLI LLOYD is a co-captain of the U.S. Women’s National Soccer Team and the reigning FIFA World Player of the Year after leading the team to victory in the 2015 World Cup. The midfielder also scored the gold-medal winning goals in both the 2008 and 2012 Olympics, before leading the team to the 2016 Games in Rio. She has played in three FIFA Women’s World Cup tournaments, helping the U.S. win bronze in 2007, silver in 2011, and finally gold in 2015. She was awarded the FIFA Golden Ball and the Silver Boot in 2015. The New Jersey native currently plays for the Houston Dash in the National Women’s Soccer League.

WAYNE COFFEY is an award-winning sports journalist and the author of more than thirty books, including such New York Times bestsellers as The Closer with Mariano Rivera; Wherever I Wind Up with R. A. Dickey; and Above the Line with Urban Meyer. 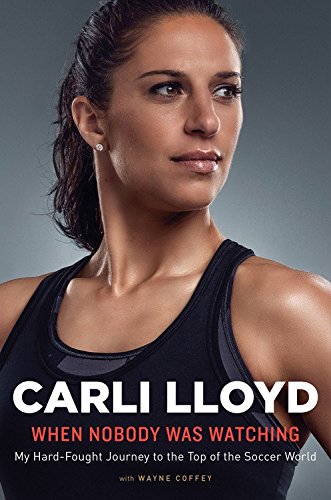 From the celebrated star of the U.S. Women’s National Soccer Team, an inspiring, uplifting, and candid memoir of how she got there

In 2015, the U.S .Women’s National Soccer Team won its first FIFA championship in sixteen years, culminating in an epic final game that electrified soccer fans around the world. It featured a gutsy, brilliant performance by team captain and midfielder Carli Lloyd, who made history that day, scoring a hat trick—three goals in one game—during the first sixteen minutes.

But there was a time when Carli almost quit the sport. In 2003 she was struggling, her soccer career at a crossroads. Then she found a trusted trainer, James Galanis, who saw in Carli a player with raw talent, skill, and a great dedication to the game. What Carli lacked were fitness, mental toughness, and character. Together they set to work, training day and night, fighting, grinding it out. No one worked harder than Carli. And no one believed in her more than James. Despite all the naysayers, the times she was benched, moments when her self-confidence took a nosedive, she succeeded in becoming one of the best players in the world.

This candid reflection on a remarkable turnaround will take readers inside the women’s national team and inside the head of an athlete who willed herself to perform at the highest levels of competition.