Kenny Loggins will be signing copies of “Footloose” at the following locations in October.

Kenny Loggins’ remarkable career spans four decades and has brought him from the top of the charts to the Grammys. He’s had smash hits on Hollywood’s favorite soundtracks, rocked worldwide stages, and found his way into children’s hearts while bringing his soulful, beautiful voice to platinum albums in a stunning variety of genres. His gift for crafting deeply emotional music is unparalleled, and it’s been a part of his life as long as he can remember. Although Loggins has 12 platinum albums, a pair of Grammys, and hits on almost all the Billboard charts under his belt, he’s far from done. With more Blue Sky Riders (his newest project) tunes in the works, he’s still looking forward to what’s next. “I’ve been lucky that I love what I do and I get to keep doing it,” he says. Loggins has a newsletter and is active on Instagram, Twitter, and Facebook with many thousands of followers.

Illustrator Tim Bowers has created memorable art for over thirty-five children’s books, including The New York Times bestsellers, Dream Big, Little Pig! written by Kristi Yamaguchi and Dinosaur Pet by Neil Sedaka and Marc Sedaka. His work has been published in children’s magazines, his illustrations have been used on a wide variety of products and his characters have appeared on hundreds of greeting cards. Bowers and his wife live in central Ohio. They are the parents of four grown children and are proud grandparents. 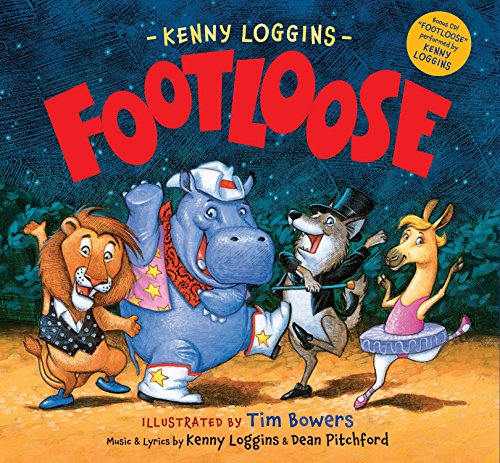 Have a rockin’ time introducing children to Footloose, rewritten for children by the one and only Kenny Loggins himself. Features a bonus CD with the new children’s “Footloose,” performed by Kenny Loggins.

Time to cut loose! Have a rockin’ time introducing children to the fun of Footloose, rewritten for children by the one and only Kenny Loggins. As a zookeeper named Jack joins the zoo animals in an all-night dance party, this new original story from Loggins is sure to get your feet moving. Little ones will love the cast of characters, including the rockin’ chimp Louise (“Geez, Louise”), Mister DJ Elephant, the lemur Marie (“Oo Wee, Marie”), Milo the wombat, Luke the funkiest cat in the zoo, and so many more rocking, bopping, boogeying, tangoing, shaking, rattling and rolling animals!

To add to the fun, the book includes a CD with new recordings by Kenny Loggins. Kids and parents can sing along to the classic hit with new lyrics, as well as a three-song medley families will love.