Felicia Day, star of “Supernatural” and “Eureka”, will be signing copies of “You’re Never Weird On the Internet” in multiple locations across the country.

Felicia Day is a professional actress who has appeared in numerous mainstream television shows and films, including a two-season arc on the SyFy series Eureka. She is currently recurring on The CW show Supernatural. However, Day is best known for her work in the web video world, behind and in front of the camera. She co-starred in Joss Whedon’s Emmy Award-winning Internet musical, Dr. Horrible’s Sing-Along Blog. She also created and starred in the hit web series The Guild, which ran for six seasons and is currently available for viewing on every major digital outlet, including Netflix.

In 2012, she launched a YouTube channel called Geek & Sundry. The network has garnered more than 1.3 million subscribers to date and more than 200 million views. In 2014, the company was purchased by Legendary Entertainment. Day continues to act as CCO and develop web content and television projects with Legendary as a producer, writer, and performer. She is also extremely active on social media, has over 2.3 million Twitter followers, and is the eighth most followed person on Goodreads, where she is also the founder of Vaginal Fantasy, a romance and fantasy book club with more than 13,000 members. 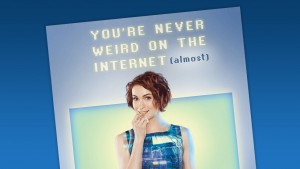 From online entertainment pioneer, actress, and “queen of the geeks” Felicia Day, You’re Never Weird on the Internet (Almost) is a “relentlessly funny and surprisingly inspirational” (Forbes.com), memoir about her unusual upbringing, her rise to internet stardom, and embracing her weirdness to find her place in the world.

When Felicia Day was a girl, all she wanted was to connect with other kids (desperately). Growing up in the Deep South, where she was “home-schooled for hippie reasons,” she looked online to find her tribe. The internet was in its infancy and she became an early adopter at every stage of its growth—finding joy and unlikely friendships in the emerging digital world. Her relative isolation meant that she could pursue passions like gaming, calculus, and 1930’s detective novels without shame. Because she had no idea how “uncool” she really was.

But if it hadn’t been for her strange background— the awkwardness continued when she started college at sixteen, with Mom driving her to campus every day—she might never have had the naive confidence to forge her own path. Like when she graduated as valedictorian with a math degree and then headed to Hollywood to pursue a career in acting despite having zero contacts. Or when she tired of being typecast as the crazy cat-lady secretary and decided to create her own web series before people in show business understood that online video could be more than just cats chasing laser pointers.

Felicia’s rags-to-riches rise to internet fame launched her career as one of the most influen­tial creators in new media. Ever candid, she opens up about the rough patches along the way, recounting battles with writer’s block, a full-blown gaming addiction, severe anxiety and depression—and how she reinvented herself when overachieving became overwhelming.

Showcasing Felicia’s “engaging and often hilarious voice” (USA TODAY), You’re Never Weird on the Internet (Almost) is proof that everyone should celebrate what makes them different and be brave enough to share it with the world, because anything is possible now—even for a digital misfit.