Andrew Targowski will be signing the copies of his book “The Deadly Effect of Informatics on the Holocaust” at the following location. 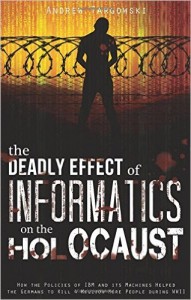 Andrew Targowski believes that the Holocaust could have been avoided or at least largely limited in scale. The mere use of the well preserved IBM punched-card machines contributed to the extermination of an “excessive” 4 million people. Before World War II, there were hardly any politicians who could have successfully opposed Hitler and Stalin. Poland, considered to be a small country among the European superpowers of those days, had a chance to manage its policies in such ways as to limit the scale of the Holocaust, and the losses of other nations could have been lower, as well. Alas, the then Polish leaders who – as the author proves in this work – held the trump cards in their hands did not live up to the task. They were guided by emotions and an ill-conceived idea of honor. The supreme driving factor, though, was the notion of Poland as a perpetual victim of history, an idea which was then dominant in the mentality of politicians and intellectuals. This was manifested in the fact that alongside Yugoslavia (and then the USSR too) the country conducted the most intensive guerrilla warfare in Europe, causing vast and unwarranted human losses.
The story of how IBM business policies and its computing machines – the forerunners of today’s computers – assisted the Holocaust in 1939-1945 ought to influence contemporary IT engineers, business people, and politicians in such ways as to prevent today’s IT systems and telecommunications networks from being used to inflict similar multi-million human losses. An Internet-accelerated expansion of the Global Economy inexorably leads to an accelerated expansion of global resources, which will lead to wars for those resources that still remain on our small planet. In these wars, personal data will certainly prove central.