The authors Kelly Odom and Judith Bainbridge will be signing the copies of their books on Greenville’s history at the following location.

Greenville author Kelly Odom began his professional career working in the textile industry before returning to his family’s pharmacy, of which he is now a third-generation owner. Odom has spent his adult life promoting and preserving the area he lives in and has served on boards of various civic organizations, including secretary of the Greenville County Historic Preservation Commission, vice president of the Greenville County Historical Society, and board member of the Palmetto Trust for Historic Preservation. His accomplishments include chairing the Save the Wilkins House Initiative and authoring Greenville’s Augusta Road. 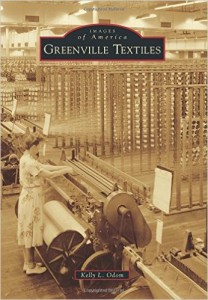 Greenville’s textile heritage is what made the community the economic force it is today. From its antebellum beginnings with only a handful of mills, Greenville continued to grow industrially as more and more Northern investors saw financial opportunity in the area. With its notable feats, such as having the largest textile mill under one roof to its many mills fighting off flying squadrons during the General Textile Strike of 1934, the countys textile past is as rich and colorful as the fabrics it produced. Greenvilles ascension to the Textile Capital of the World was unfortunately followed by the flood of overseas goods, resulting in the closing of many Upstate institutions. Though these mills are now silent, their efforts are what attracted so many other industries to the area.

Judith Bainbridge retired in 2007 from Furman University as professor of English emerita. A Greenville resident since 1976, she is a historic preservationist who has extensively researched local history. She is the author of books on the West End and the Greenville Womens College, as well as the 2008 chamber of commerce sponsored Historic Greenville and Greenvilles Heritage, a collection of her articles on local history from the Greenville News. 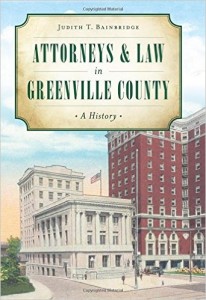 For more than two hundred years, lawyers and judges, many of them colorful and powerful personalities, have practiced law and maintained order in Greenville County. In the nineteenth century, Judges Richard Gantt and Waddy Thompson began the tradition of Upstate justice. At the time of the Civil War, Benjamin Perry and his colleagues argued fiercely about secession. Recently, local attorneys and judges, both black and white, have struggled with integration and civil rights issues. History is dotted with legal dynasties; individual practioners like Miss Jim Perry and John Bolt Culbertson; and judges, including J. Robert Martin and Frank Eppes, who have played significant roles in Upstate law. Author Judith Bainbridge details the impact and personalities of law and lawyers in Greenville County.