Dr. Mitchell Wick will be signing the copies of “Megaphysics II” at the following location.

Dr. Wick is a retired physician who, besides being a board-certified physician, had undergraduate studies in chemistry, including research in Polymers at the University of South Florida. Collegiate material for a bachelor’s in chemistry included physics through quantum mechanics, kinetics, and thermodynamics prior to attending medical school in 1976 at Kirksville College of Osteopathic Medicine. He had also published two prior books on physics, which are Megaphysics: A New Look at the Universe”(2003) and The Equation of Everything (2014). He had residency training in Parkview Hospital in radiology and nuclear medicine, and besides being board certified in family practice, he was a diplomat of the American Academy of Pain Management and American Association of HIV Medicine. This author is and has been in Who’s Who in the World, Who’s Who in Science and Engineering, A Dictionary of International Biography (53rd edition, IBC Cambridge Press), and 2000 Outstanding Intellectuals of the 21st Century (40th edition, IBC Cambridge Press, 2007). He was nominated as International Scientist of the Year in 2006 by IBC. 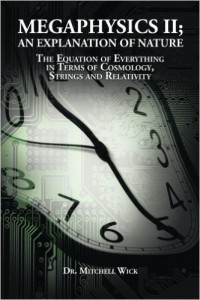 This book is a comprehensive mathematical exposition of how one-inch-long equation space-time is directly proportional to space and inversely proportional to mass can be used to explain all phenomena of nature. It explains the equation in terms of metric tensors and in terms of quantum mechanics and demonstrate how they equal each other and the equation of everything, which in tensors is Riemannian 4 space = Mintkowski 3 space – 1/2 space-time curvature metric called gravity/Ricci tensor of inertial mass all multiplied by 1/c^2 or if substituting the Ricci Tensor (c^2) by the energy density of matter completes the equation. A new mathematical operator is introduced called the spiral operator, which describes space-time in black holes and the total curvature of the universe is mathematically determined. Black energy and dark matter are shown how they interrelate and relate to what caused the big bang, and there is a theory as to what occurred prior to the big bang. Also a mathematical mechanism is given showing a rotational component in the quantum bubble prior to the big bang and how it fits with nature. The book applies some comments made by other physicists about compactification (rolled or curled up dimensions) to show the compactified circle of Type Iia string theory can be applied to arc length as space-time, the radius as the sum of all Riemann Forces and the angle as space-time curvature. Relativity and cosmology are explained, as well as quantum mechanics, including the Schrodinger equation, and how many more conn-compactified dimensions can exist besides the postulated twenty-six in string theory. M Theory is also explained, along with membranes and how they interrelate to energy and matter. The Hawking paradox is solved using Schwarzchild space-time and much more.