Diane Kostick will be signing the copies of “Chronicles of Barrington, Illinois” at the following location.

Diane P. Kostick has lived in Barrington for more than fifty years. She taught language arts in Barrington Unit School District 220 for thirty-nine years and now teaches courses in both U.S. history and humanities at the Illinois Institute of Art in Schaumburg. Kostick has been a member of the Barrington Writer’s Workshop and the Second Saturday Poetry Workshop for decades and she is the author of eight books, including Voices of Barrington. 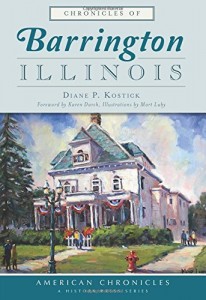 Nestled in the northwestern suburbs of Chicago, Barrington offers a treasure-trove of fascinating history and area lore. Meet the passionate guardians of this bucolic landscape who embody the pioneering midwestern spirit. While the community maintains a proud tradition of civic improvement and conservation, its citizens ably represent Barrington in the national arena. The town’s record of military service and veteran care dates back to the Civil War. Floyd Bateman helped organize the 1933 World’s Fair, while Christine O’Malley won acclaim at the Sundance Film Festival for her crossword documentary. Three members of the 1985 Bears championship squad called the enclave home. Author Diane Kostick paints a portrait of those whose vision, resourcefulness and dedication contributed to the strength and character of this proud community.