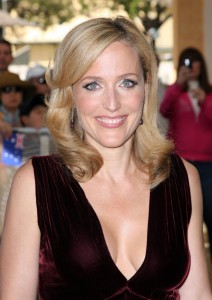 Gillian Anderson, star of “The X-Files”, will be signing copies of “A Vision Of Fire” and would love to see you there!

Gillian Leigh Anderson (born August 9, 1968) is an American actress. After beginning her career in theatre, Anderson achieved international recognition for her role as Special Agent Dana Scully on the American television series The X-Files. Her film work includes The House of Mirth (2000), The Mighty Celt (2005), The Last King of Scotland (2006), and two X-Files films, The X-Files (1998) and The X-Files: I Want to Believe (2008). In 2013, Anderson became a recurring character on Hannibal and in 2014, she began starring in Crisis, which was cancelled half way through its first season on May 9th, 2014, with the final episode airing June 21st. 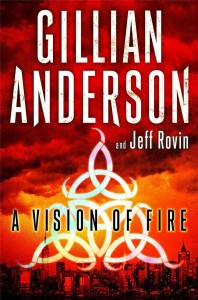 Renowned child psychologist Caitlin O’Hara is a single mom trying to juggle her job, her son, and a lackluster dating life. Her world is suddenly upturned when Maanik, the daughter of India’s ambassador to the United Nations, starts speaking in tongues and having violent visions. Caitlin is sure that her fits have something to do with the recent assassination attempt on her father—a shooting that has escalated nuclear tensions between India and Pakistan to dangerous levels—but when teenagers around the world start having similar outbursts, Caitlin begins to think that there’s a more sinister force at work.

In Haiti, a student claws at her throat, drowning on dry land. In Iran, a boy suddenly and inexplicably sets himself on fire. Animals, too, are acting irrationally, from rats in New York City to birds in South America to ordinary house pets. With Asia on the cusp of nuclear war, Caitlin must race across the globe to uncover the mystical links among these seemingly unrelated incidents in order to save her patient—and perhaps the world.

You can pre-order her book on Amazon!