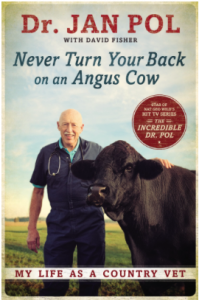 Jan Pol, star of “The Incredible Dr. Pol”, will be signing copies of “Never Turn Your Back on an Angus Cow” at the following locations and would love to see you there!

The star of The Incredible Dr. Pol shares his amusing, and often poignant, tales from his four decades as a vet in rural Michigan.

Dr. Jan Pol is not your typical veterinarian. Born and raised the in Netherlands on a dairy farm, he is the star of Nat Geo Wild’s hit show The Incredible Dr. Pol and has been treating animals in rural Michigan since the 1970s. Dr. Pol’s more than 20,000 patients have ranged from white mice to 2600-pound horses and everything in between.

From the time he was twelve years old and helped deliver a litter of piglets on his family’s farm to the incredible moments captured on his hit TV show, Dr. Pol has amassed a wealth of stories of what it’s like caring for this menagerie of animals. He shares his own story of growing up surrounded by animals, training to be a vet in the Netherlands, and moving to Michigan to open his first practice in a pre fab house. He has established himself as an empathetic yet no-nonsense vet who isn’t afraid to make the difficult decisions in order to do what’s best for his patients—and their hard-working owners. A sick pet can bring heartache, but a sick cow or horse could threaten the very livelihood of a farmer whose modest profits are dependent on healthy livestock.

Reminiscent of the classic books of James Herriot, Never Turn Your Back on an Angus Cow is a charming, fascinating, and funny memoir that will delight animal lovers everywhere. 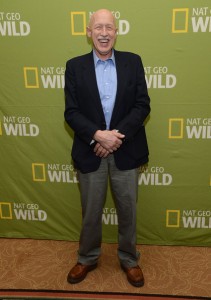 Fun Facts about the Author!

-Before marrying his wife Diane, Dr. Pol considered moving to New Zealand to open up a veterinary practice.

-Dr. Pol has rescued several Great Danes, rabbits, emus, and even a cow that he helped raise with his family.

-Dr. and Mrs. Pol purchase all of their beef and pork products from local farmers.

-Charles was the watermelon-eating champion of Chippewa Hills High School in 1998.

-All three of Dr. Pol’s children have worked at his veterinary clinic.

-Dr. Pol does not have an email account. His wife Diane, along with his staff members, answer all e-mail inquiries for Pol Veterinary Clinic.

-Dr. Pol and Charles both own and proudly wear wooden clogs.

-Dr. Pol and Charles frequently play chess on a chess set that Dr. Pol made as a child.

-Dr. Pol uses a wood-burning stove to heat his house.

-Dr. Pol has a phobia of heights.

-Part of the town of Weidman, Michigan, where Pol Veterinary Services is located, is on the Saginaw Chippewa Indian Tribe Reservation.

-Dr. Pol has many clients who are Amish.

-Dr. Pol has clients that drive from Detroit, which is a 3-hour drive, to come to his clinic.

-Dr. Pol and his wife Diane celebrate Saint Nicholas Day, which is the Dutch version of Christmas.

-When Dr. Pol delivers a calf he always takes his shirt off. Why? “Because my skin is easier to clean than my clothes,” according to Dr. Pol.

-Dr. Pol and Mrs. Pol used to host swimming classes at their pool.

-Dr. and Mrs. Pol use an FCC licensed intercom to communicate from the clinic to his vehicles.

-Dr. Pol imported his Friesian Horses from the Netherlands.

-Two of Dr. Pol’s horses were trained by the Amish to pull carriages.

-Dr. Pol purchased his Rolls Royce from a museum in Wales.