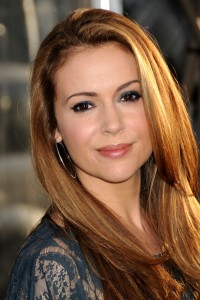 Alyssa Milano, star of “Who’s the Boss?”, making an appearance to sign copies of “Hacktivist.”

Alyssa Jayne Milano (born December 19, 1972) is an American actress, producer and former singer. She is known for portraying Samantha Micelli on the ABC sitcom series Who’s the Boss? (1984–92), Jennifer Mancini on the Fox soap opera Melrose Place (1997–98), and Phoebe Halliwell on The WB series Charmed (1998–2006). Since 2013, she has starred as Savannah Davis in ABC drama Mistresses.

Milano is the daughter of Lin, a fashion designer and talent manager, and Thomas M. Milano, a film music editor. She is of Italian ancestry. Milano was born in Bensonhurst, Brooklyn and lived there until a neighborhood shooting prompted the family to relocate to Staten Island. She has a younger brother, Cory (b. 1982), who is also an actor. In a 2003 interview, Milano recalled having had a good childhood, having grown up in a “loving, true family.” Having grown up in front of the camera, Milano did not feel that it jeopardized her childhood: “I love my family very much – they’ve really backed my career. I consider myself to be normal: I’ve got to clean my room, and help in the kitchen.” 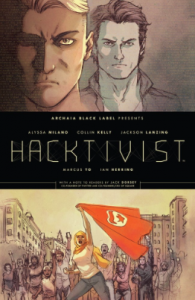 A fast-paced, ripped-from-the-headlines tech thriller from the mind of Alyssa Milano!

From the creative mind of Alyssa Milano, with artist Marcus To and writers Jackson Lanzing and Collin Kelly, Hacktivist is a fast-paced cyber-thriller about friendship and freedom in a time of war. The world knows Ed Hiccox and Nate Graft as the young, brilliant co-founders of YourLife, a social networking company that has changed the way the world connects with each other. The world knows “sve_Urs3lf” as the largest white-hat hacking group on the planet, exposing information and sparking revolutions across the globe. What the world doesn’t know is that this is a lie. Ed Hiccox and Nate Graft are sve_Urs3lf. When their operation is discovered by the US Government, and their company is taken over by military contracts and CIA, Ed and Nate must face the real world beyond the code and choose between friendship and what they believe to be right.