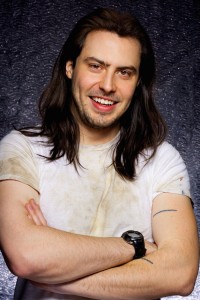 Andrew W.K., musician & King of Partying, is going to be making an appearance signing copies of “I Get Wet,” and will be waiting for you!

Not just a party animal but a party guerrilla, Andrew W.K. burst onto the scene with a hybrid of metal, pop, and dance that parodied and paid tribute to the cheesiest, sleaziest aspects of all three styles. The California-born, Michigan-bred W.K. — the initials stand for everything from “White Killer” to “Women Kum” to “Wilkes-Krier,” the surnames of his mom and dad — began classical piano lessons at age four and moved on to playing in Detroit punk and metal bands, including the Pterodactyls. By age 17, W.K. was recording his own material. After moving to New York City a year later, his friends passed his demos on to various labels, including Bulb, who released W.K.’s debut EP, Girls Own Juice, in early 2000 and that fall’s Party Til You Puke EP. The buzz around W.K.’s hedonistic, so-dumb-it’s-smart rawk resulted in a gig opening for the Foo Fighters as well as deals with Island/Def Jam in the U.S. and Mercury in the U.K.; his first major-label release was 2001’s anthemic Party Hard EP.

In particular, the U.K. fell in love with W.K.’s ironic trailer-trash look and sound, inspiring critical raves from NME and Kerrang! as well as hysteria at his live shows; he was hospitalized after a fan head-butted him as he crowd-surfed at his London debut at the Highbury Garage. The full-length I Get Wet arrived in late 2001 in the U.K. and in spring 2002 in the U.S., where his “It’s Time to Party” was used in a TV commercial for the travel website expedia.com. Andrew W.K. also gigged extensively that spring, both on his own and as part of an MTV 2 package tour. He returned in 2003 with The Wolf, a bigger, lusher album than his debut that earned mixed reviews. The following year, W.K. hosted an advice show on MTV 2, Your Friend, Andrew W.K. He also maintained his busy tour schedule, and released the concert film Who Knows? in early 2006. Andrew W.K.’s third album, Close Calls with Brick Walls, was released in Japan and South Korea that summer, and was issued in the U.S. as a vinyl-only album by Load Records in 2007. That summer, he also appeared as a guest star on Kathy Griffin’s television show My Life on the D List. That year, he also produced the Lee “Scratch” Perry album Repentance.

Andrew W.K.’s career only became more eclectic as the 2000s drew to a close. In 2008 alone, W.K. founded a Manhattan club, Santo’s Party House; performed with the Calder String Quartet; and released One-Shot Game: Covers, a collection of J-pop cover songs, and I Will Change Your Life, an anthology of his advice columns for Japanese music magazine Rockin’ On. He also became a member of the group Current 93, contributing bass, piano, guitar, and vocals to their 2009 album, Aleph at Hallucinatory Mountain and performing on the band’s tour that spring. Around that time, W.K. released Damn! The Mixtape, Vol. 1 and his Cartoon Network live-action demolition show Destroy Build Destroy premiered. He also became a frequent guest on the Fox News show Red Eye and appeared on the VH1 series The Great Debate. In late summer 2009, his album of “spontaneous solo piano improvisations,” 55 Cadillac, was released by the Skyscraper Music Maker label, which also planned to give Close Calls with Brick Walls a U.S. release on CD. Around that time, W.K. also released Gundam Rock in Japan, which featured his versions of the music to the classic anime Gundam to commemorate the series’ 30th anniversary. Close Calls with Brick Walls finally appeared on CD in wide release in 2010 as a set with Mother of Mankind, a disc of rarities and previously unreleased tracks. The following year, W.K. released a Japan-only EP, Party All Goddamn Night, which featured a mix of new and previously released material; in 2012, he celebrated the 10th anniversary of I Get Wet with a deluxe edition featuring an extra volume of live and unreleased songs. 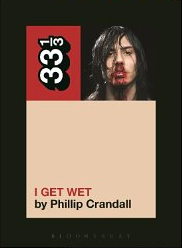 “It’s Time To Party,” the first track off of I Get Wet, opens with a rapid-fire guitar line — nothing fancy, just a couple crunchy power chords to acclimate the ears — repeated twice before a booming bass drum joins in to provide a quarter-note countdown. A faint, swirling effect intensifies with each bass kick and, by the eighth one, the ears have prepped themselves for the metal mayhem they are about to receive. When it all drops, and the joyous onslaught of a hundred guitars is finally realized, you’ll have to forgive your ears for being duped into a false sense of security, because it’s that second intensified drop a few seconds later — the one where yet more guitars manifest and Andrew W.K. slam-plants his vocal flag by screaming the song’s titular line — that really floods the brain with endorphins, serotonin, dopamine, and whatever else formulates invincibility.

Polished to a bright overdubbed-to-oblivion sheen, the party-preaching I Get Wet didn’t capture the zeitgeist of rock at the turn of the century; it captured the timelessness of youth, as energized, awesome, and unapologetically stupid as ever. With insights from friends and unprecedented help from the mythological maniac himself — whose sermon and pop sensibilities continue to polarize — this book chronicles the sound’s evolution, uncovers the relevance of Steev Mike, and examines how Andrew W.K.’s inviting, inclusive lyrics create the ultimate shared experience between artist and audience.

You can order here on Amazon!