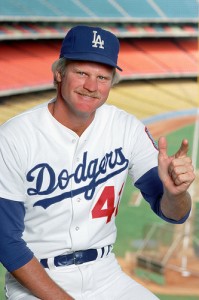 Jerry Reuss, former LA Dodgers star, will be making an appearance to sign copies of “Bring In the Right Hander.”

Jerry Reuss (born June 19, 1949) — pronounced “royce”—is a former left-handed pitcher in Major League Baseball, best known for his years with the Los Angeles Dodgers, who had a 22-year career from 1969 to 1990.

Reuss played for eight teams in his major league career; along with the Dodgers (1979–87), he played for the St. Louis Cardinals (1969–71), Houston Astros (1972–73), and Pittsburgh Pirates (1974–78). At the end of his career (1987–90), he played for the Cincinnati Reds, California Angels, Chicago White Sox, Milwaukee Brewers, and the Pirates again (Reuss is one of only two Pirates to have played for Danny Murtaugh, Chuck Tanner, and Jim Leyland, the other being John Candelaria). In 1988 he became the second pitcher in history, joining Milt Pappas, to win 200 career games without ever winning 20 in a single season. He was one of only 29 players in major league history to play in four different decades. 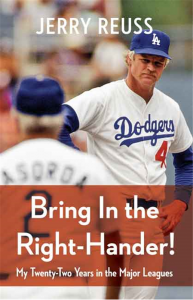 One of only twenty-nine Major Leaguers to play in four different decades, Jerry Reuss pitched for eight teams, including the Pittsburgh Pirates twice. So when Reuss tells his story, he covers about as much of baseball life as any player can.

Bring In the Right-Hander! puts us on the mound for the winning pitch in Game Five of the 1981 World Series, then takes us back to the schoolyards and ball fields of Overland, Missouri, where Reuss first dreamed of that scene. His baseball odyssey, dedicated to the mantra “work hard and play harder,” began in 1969 with his hometown team, the St. Louis Cardinals (who traded him three years later for mustache-related reasons). Reuss carries us through his winning seasons with the Dodgers, taking in a no-hitter and that World Series triumph, and introducing us to some of baseball’s most colorful characters. Along the way, as the grizzled veteran faces injuries, releases, and trips to the Minors, then battling his way back into the Majors to finish his career with the Pirates, we get a glimpse of the real grit behind big league life, on and off the field.