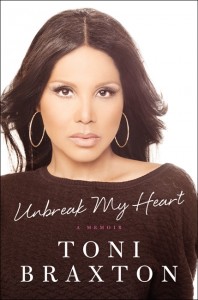 Toni Braxton, pop songstress, will be signing copies of “Unbreak My Heart” at the following location:

In this heartfelt memoir, six-time Grammy Award-winning artist and star of WE TV’s reality hitBraxton Family Values, Toni Braxton writes about her personal life decisions and their impact on her health, family and career.

While Braxton appears to be living a gilded life—selling 60 million records, appearing in sold-out Las Vegas performances and hit shows like Dancing with the Stars, and starring in her own reality series—hers is in fact a tumultuous story, a tale of triumph over a life filled with obstacles, including two bankruptcy filings. The mother of an autistic child, Braxton long feared that her son’s condition might be karmic retribution for earlier life choices, some of which will shock fans. But when heart ailments began plaguing her at the age of 41 and she was diagnosed with Lupus, Braxton knew she had to move beyond the self-recrimination and take charge of her own healing. Intensely honest and deeply inspirational, Unbreak My Heart is the never-before-told story of the measures Braxton took to make herself and her family whole again. 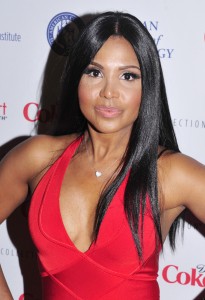 Toni Michele Braxton (born October 7, 1967) is an American R&B singer-songwriter, pianist, musician, record producer, actress, television personality, and philanthropist. Braxton has won six Grammy Awards, seven American Music Awards, and nine Billboard Music Awards. Throughout the years, she has sold over 66 million records worldwide establishing herself as an R&B icon. Braxton was one of the best-selling female artist of the 1990s, garnering her honorific titles such as the “Queen of R&B”.

Braxton topped the Billboard 200 with her 1993 self-titled debut studio album and its hit singles “Love Shoulda Brought You Home”, “Another Sad Love Song”, “Breathe Again” and “You Mean the World to Me”. She continued that streak with her second studio album, Secrets, which spawned the number-one hits “You’re Makin’ Me High” and “Unbreak My Heart” in 1996.

Although she had successful albums and singles, Braxton filed for bankruptcy in 1998, but then returned with her chart-topping third album, The Heat in 2000, which included the international hit single “He Wasn’t Man Enough”. In 2009, she returned to the spotlight with “Yesterday”, a No. 12 R&B hit which served as the first single from her new album Pulse, released on May 4, 2010, which debuted at No. 1 on Billboard R&B Album Chart. Braxton was involved in the 7th season of the reality show Dancing with the Stars. Her professional partner was Alec Mazo. She was voted off in week five of the competition. It was announced on October 6, 2010 that Braxton had once again filed for bankruptcy and was reporting somewhere between $1–$50 million in debts. Braxton was later discharged of her debt. A reality series entitled Braxton Family Values, starring Toni and her sisters, debuted April 12, 2011 on WE tv. WE tv ordered a 13-episode second season of the show after the third episode of the first season. On September 18, 2011, Braxton was inducted into the Georgia Music Hall of Fame. Braxton released the single “Hurt You” from her upcoming duet album with Babyface entitled Love, Marriage & Divorce and as of December 2013 it marks her seventh Billboard Adult R&B No. 1 on the chart.