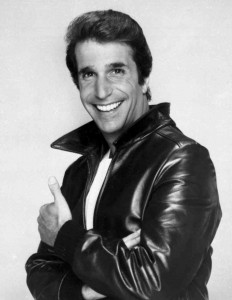 Henry Winkler, star of “Happy Days”, will be signing copies of “Bookmarks Are People Too” at the following location:

Henry Franklin Winkler, OBE (born October 30, 1945) is an American actor, director, producer and author.
Winkler is best known for his role as Fonzie in the 1970s American sitcom Happy Days. “The Fonz”, a leather-clad greaser and auto mechanic, started out as a minor character at the show’s beginning, but had achieved top billing by the time the show ended. He currently stars as Sy Mittleman on Childrens Hospital.

Henry Winkler was born in Manhattan, New York City, New York the son of Ilse Anna Maria (née Hadra) and Harry Irving Winkler, a lumber company president. Winkler’s Jewish parents emigrated from Germany to the United States in 1939, “on the eve” of World War II.
Winkler attended the McBurney School, received his bachelor’s degree from Emerson College in 1967, and earned his MFA from the Yale School of Drama in 1970. In 1978, Emerson awarded Winkler an honorary doctorate of humane letters. Winkler has also received an honorary Doctor of Humane Letters from Austin College.

Winkler has been married to Stacey Furstman Weitzman since May 5, 1978; with her he has two children, Zoe Emily (b. 1980) and Max Daniel (b. August 18, 1983), and a stepson, Jed, from Stacey’s previous marriage with Howard Weitzman. He is the godfather of Bryce Dallas Howard, daughter of Happy Days co-star Ron Howard. Henry was the 9th King of the Bacchus, Mardi Gras, Parade in New Orleans in 1977; the theme was “Happily Ever After”. Winkler’s relationship with his parents (now deceased) was strained, due at least partially to their attitude towards his dyslexia. He stated his father referred to him as “dumb dog” and often punished him for his difficulties in school. 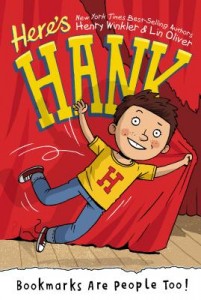 Hank stars the same Hank as in the bestselling Hank Zipzer series, only this time he’s in 2nd grade! Hank is a kid who doesn’t try to be funny, but he somehow always makes the kids in his class laugh. He’s pretty bad at memorizing stuff, and spelling is his worst subject. (But so are math and reading!) In the first book in this new series, Hank’s class is putting on a play, and Hank wants the lead part: Aqua Fly. But he freezes in his audition and can only buzz like a fly. His teacher creates a special part for Hank, a silent bookmark. This may seem like an insignificant role, but when his enemy, Nick McKelty, freezes during the performance, it’s up to Hank to save the play!
You can pre-order the book here on
Amazon!