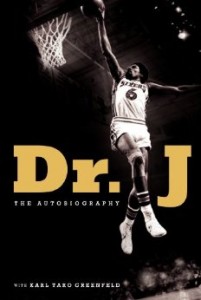 Julius “Dr. J” Erving, NBA Hall of Famer, will be signing copies of Dr. J at the following location:

With flights of improvisation around the basket, and his towering afro, Julius Erving became one of the most charismatic (and revolutionary) players basketball has ever known. A cool, acrobatic showman, his flamboyant dunks sent him to the Hall of Fame and turned the act of jamming a basketball through a hoop into an art form, winning the admirations of fans, sportscasters, and opponents, including Bill Walton, Magic Johnson, Larry Bird, and Kareem Abdul Jabbar. But while the public has long revered this cultural and sports icon, few have ever known of the double life of Julius Erving. There is Julius, the bright, inquisitive son of a Long Island domestic worker who wanted to be respected for more than just his athletic ability. And there is Dr. J, the balletic baller who transformed the game and inspired a generation of superstars, including Michael Jordan, Kobe Bryant, and LeBron James. Despite the pristine image put forward in his endorsement deals, he was far from perfect. In Dr. J., Erving goes on the record about the personal problems he faced and sometimes created. He speaks frankly about his career and the game; the adulterous affair that produced a daughter, professional tennis player Alexandra Stephenson; his 20-year-old son’s tragic death; and the heartbreaking dissolution of his longtime marriage and its aftermath. Poignant and surprising Erving’s story traces the inner-lives of the nearly perfect player and the imperfect man – and how he has come to terms with both. 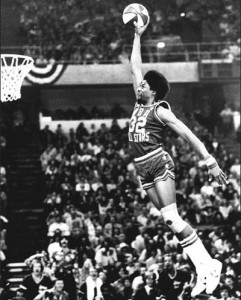 Julius Winfield Erving II (born February 22, 1950), commonly known by the nickname Dr. J, is a retired American basketball player who helped launch a modern style of play that emphasizes leaping and play above the rim. Erving helped legitimize the American Basketball Association (ABA), and was the best-known player in that league when it merged with the National Basketball Association (NBA) after the 1975–76 season.
Erving won three championships, four Most Valuable Player Awards, and three scoring titles with the ABA’s Virginia Squires and New York Nets (now the NBA’s Brooklyn Nets) and the NBA’s Philadelphia 76ers. He is the sixth-highest scorer in ABA/NBA history with 30,026 points (NBA and ABA combined). He was well known for slam dunking from the free throw line in Slam Dunk Contests and was the only player voted Most Valuable Player in both the American Basketball Association and the National Basketball Association.

Erving was inducted in 1993 into the Basketball Hall of Fame and was also named to the NBA’s 50th Anniversary All-Time team. In 1994, Erving was named by Sports Illustrated as one of the 40 most important athletes of all time. In 2004, he was inducted into the Nassau County Sports Hall of Fame. Most observers[who?] consider him one of history’s most talented players; he is also widely acknowledged[by whom?] one of the game’s best dunkers. While Connie Hawkins, “Jumping” Johnny Green, Elgin Baylor, and Gus Johnson performed spectacular dunks before Erving’s time, “Dr. J” brought the practice into the mainstream. His signature dunk was the “slam” dunk, since incorporated into the vernacular and basic skill set of the game in the same manner as the “cross-over” dribble and the “no look” pass. Before Julius Erving, dunking was a practice usually among big men to show their brutal strength. This was seen by basketball enthusiasts as style over substance and unsportsmanlike. Erving, however, changed that misconception and turned the dunk into the most qualitative shot in the game. The “slam dunk”, as it is called, became an art form and came to help popularize the sport.