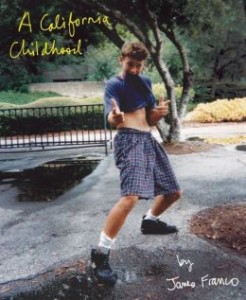 James Franco, Oscar nominated actor, will be signing copies of “A California Childhood” at the following location:

In A California Childhood he plays with the concept of memoir through personal snapshots, sketches, paintings, poems, and stories. “I was born in 1978 at Stanford Hospital and spent my first eighteen years in a single house at the end of a cul-de-sac in Palo Alto,” Franco writes in his introduction. Steve Jobs’s daughter and the grandson of one of the Hewlett-Packard founders may have both been in his graduating class, but just across the freeway from his home turf lay East Palo Alto, which in 1992 had the highest murder rate per capita in the country. For Franco, the terrain of his upbringing is fraught with the complication of a city divided. But within that diversity, universal aspects of adolescence rise to the surface, and those are the subjects at the heart of Franco’s work.

Ultimately this is a portrait of a childhood brightened by California sunshine, but with trouble awaiting in the shadows. At turns funny, dark, and emotional, the journey of this book delivers an undeniable immediacy. And at the end the reader is left wondering just where the line of Franco’s art ends and where his true life begins.