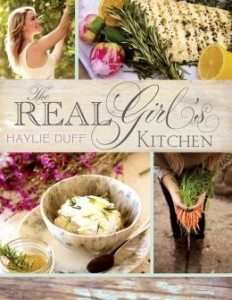 Though she is best known as an actress, Haylie Duff feels quite at home in her kitchen. When she started serving up easy and elegant recipes, kitchen tips, and entertaining advice on her blog, Real Girl’s Kitchen, the site quickly grew into a destination for fans and foodies alike.

Now everyone’s favorite recipes—along with dozens of new dishes—are available in a gorgeous, hand-held volume. The Real Girl’s Kitchen covers it all: breakfasts, salads, soups, appetizers, snacks . . . even recipes for your “cheat days”!

Haylie tackles everything from healthful green smoothies, to drinks for an impromptu gathering, to whipping up an impressive meal for a date. Each recipe is accompanied by full-color photos, along with a personal story from Haylie’s life.

The Real Girl’s Kitchen shows readers not only how to eat to live, but how to love to eat along the way.

Haylie Duff was born on February 19, 1985 in Houston, Texas. She made her film debut in The Addams Family Reunion (1998). After the film, she continued to land minor television roles. She gained wider exposure in 2003 on Lizzie McGuire. In 2004, she earned national fame in Napoleon Dynamite. In 2005, she took a role on 7th Heaven. In 2008, she produced and hosted the MTV reality show Legally Blond.