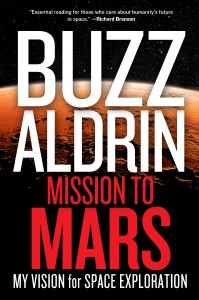 Buzz Aldrin, second man to walk on the Moon, will be signing copies of “Mission To Mars” at the following locations:

Legendary “space statesman” Buzz Aldrin speaks out as a vital advocate for the continuing quest to push the boundaries of the universe as we know it. As a pioneering astronaut who first set foot on the moon during mankind’s first landing of Apollo 11–and as an aerospace engineer who designed an orbital rendezvous technique critical to future planetary landings–Aldrin has a vision, and in this book he plots out the path he proposes, taking humans to Mars by 2035.

Buzz Aldrin (born Edwin Eugene Aldrin, Jr., January 20, 1930) is an American astronaut, and the second person to walk on the Moon. He was the lunar module pilot on Apollo 11, the first manned lunar landing in history. On July 21, 1969, he set foot on the Moon, following mission commander Neil Armstrong. He is also a retired United States Air Force pilot.