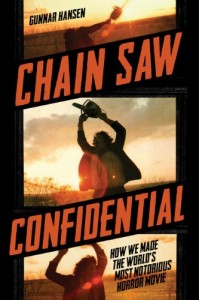 Gunnar Hansen, Leatherface himself, will be signing copies of Chain Saw Confidential at the following locations:

The original 1974 film The Texas Chain Saw Massacre seized the imaginations of audiences and critics, going from controversial cult sensation to being ranked by Total Film as the greatest horror movie ever made. It’s been shown at Cannes, briefly banned in England, and included in the permanent collection of New York’s MoMA. This fascinating literary memoir of the making of the film comes from the unique perspective of Gunnar Hansen, the actor who played the chain saw–wielding Leatherface. A critically acclaimed poet and author, Hansen tells the real story of the film, debunking myths, giving behind-the-scenes details, and offering insights on the film’s reception and our enduring fascination with the horror genre today.