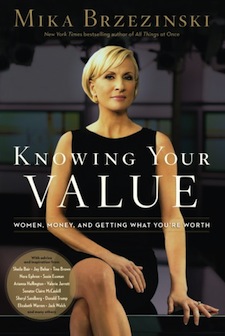 “Morning Joe” co-host and and New York Times bestselling author of “All Things at Once,” Mika Brzezinski has written a new book that examines women’s value in the workplace – “Knowing Your Value” – and she’ll be making rounds promoting and signing copies of it.

Brzezinski, the daughter of foreign policy expert and former National Security Advisor Zbigniew Brzezinski, began co-hosting the two-hour late-morning radio show “Morning Joe” in 2008. The show has since wrapped in 2010. She also reports for NBC Nightly News and is an alternating news anchor for Weekend Today. Her career in journalism began in 1990 as an assistant at ABC’s World News This Morning. By 1995, she was the weekday morning anchor for CBS affiliate WFSB-TV/WFSB-DT in Hartford, CT., and in 1997 she became a CBS correspondent and anchor for CBS’s Up to the Minute.

Brzezinski is well-noted for her protests against what she refers to as “trivial journalism.” In 2007, she declined to read a “news” report about Paris Hilton’s release from jail and then proceeded to try lighting the story’s script on fire right on the air. The script’s fate was finally a shredder. And I say, “well done.”

“Knowing Your Value” will be released by Weinstein Books on April 26, 2011.

From the Publisher
Written in Mika’s brutally honest, funny, and self-deprecating style, Knowing Your Value is a vital book for professional women of all ages.

It’s no secret that women have long been overlooked and under-compensated, and while great strides have made in recent decades, the value placed on women versus their male counterparts is still consistently unbalanced. In Knowing Your Value, bestselling author Mika Brzezinski takes an in-depth look at how women today achieve their deserved recognition and financial worth.