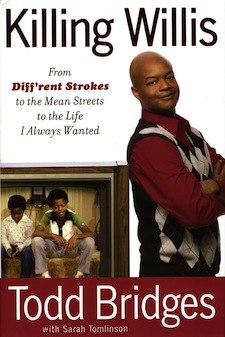 Born in San Francisco, California, Bridges comes from a family of performers. His mother Betty Bridges was an actress and both of his siblings, Jimmy and Verda, are actors. Todd and wife Dori have two children – the eldest, Spencir Bridges, appeared in the film Daddy Day Camp.

Before Diff’rent Strokes, Bridges appeared periodically as a guest star on The Waltons, making him the first African-American child actor to have a recurring role on a TV Series. He also appeared on Little House on the Prairie and in the miniseries Roots.

“Killing Willis: From Diff’rent Strokes to the Mean Streets to the Life I Always Wanted” which was released on March 8, 2011, follows Bridges’ childhood abuse, criminal charges, drug addiction, and struggle to shed his identity as the character of “Willis” that he played for eight years.

From the Publisher
For Todd Bridges early stardom was no protection from painful childhood events that paved the road to his own personal hell. One of the first African-American child actors on shows like Little House on the Prairie, The Waltons, and Roots, Bridges burst to the national forefront on the hit sitcom Diff’rent Strokes as the subject of the popular catchphrase, “What’chu Talkin About Willis?” When the show ended, Bridges was overwhelmed by the off-camera traumas he had faced. Turning to drugs as an escape, he soon lost control.