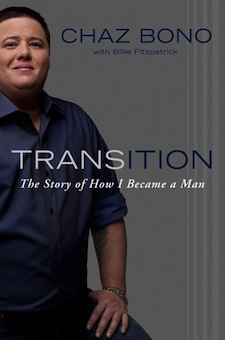 Chaz Bono, son of the legendary pop duo Sonny & Cher, will be making a New York City appearance to sign copies of “Transition: The Story of How I Became a Man.”

In 1995, Chaz formally identified himself publicly as a lesbian in an interview with national gay and lesbian magazine “The Advocate.” And in 2008, at age 39, Bono began undergoing transformation from female to male, and one year ago, legally changed his name and gender.

He has been an outspoken activist for the LGBT community for 15 years, has been a spokesperson for the Human Rights Campaign, actively canvassed against the Defense of Marriage Act, and has been involved in promoting National Coming Out Day. “Transition” will be released on May 10, 2011.

About the book
Known to America as Chastity, the child of famed pop duo Sonny and Cher, who appeared on her parents’ TV show as a little girl, Chaz has become the most high-profile face of the transgender community in America today. In “Transition,” Chaz tell his story, from childhood, dressing like and playing with the boys, to coming out in his twenties, to the death of his father, drug addiction, and finally to his decision to transition. In the book, Chaz offers the reader and intimate look at his journey in transitioning, in both his writing and photographs taken throughout the process.

It Gets Better – Chaz Bono